People are finally starting to wake up to the fact that the vaccines do not work.  This gentlemen uses Irish government data to ask some very uncomfortable questions about the vaccines.

It is not 100% correct to say the vaccines are ineffective; they are very effective at producing profits.

The clown doing the Prat fall in the commercial knows all about the profit generating ability of the vaccines.  Rumor has it that he is the major shareholder in the Canadian company that holds the patent on the lipid Nano particles that make mRNA vaccines possible.  Every time someone is vaccinated the clown makes money.  Unfortunately that clown is also the Prime Minister of Canada and is in a position to force vaccinations on Canadians, multiple times per year for as long as he holds power.

In a normal functioning democracy this would be investigated but Canada is not a normal functioning democracy.  In the last federal election 4 out of 5 eligible voters did not vote for Justin Trudeau.  He does not really speak for the country yet he is somehow able to rule as a monarch.  He has even introduced a caste system in Canada without a peep of protest.  Unvaccinated Canadians are now untouchables who have no legal rights.

The secret to Trudeau’s power is not voters.  He is held in power by indifference and other public figures who adore him.  People like the soon to be departed Jason Kenney and Jagmeet Singh.  Jagmeet might be the only person in the country that wants to have sex with Justin Trudeau more than Jason Kenney does.

Jagmeet and Jason truly admire Trudeau and would do anything for him but indifference is really what keeps Trudeau in power.  Canada is not just a dysfunctional democracy it isn’t even a real country.  50 years of liberal policies have removed any trace of Canadian cultural identity.  Unrestricted immigration coupled with multiculturalism have turned Canada in to nothing more than a hotel.  A place where ethnic enclaves sleep close to each other but share nothing more than proximity.  50 years ago a Canadian could tell you what it means to be Canadian.  Now being Canadian is simply defined as not being American.  The problem is we are not anything else either.

July 1st is Canada Day.  Since Trudeau has driven the last nails in to Canada’s coffin we should think about renaming it.  Not America Day doesn’t really roll off the tongue but it is accurate. 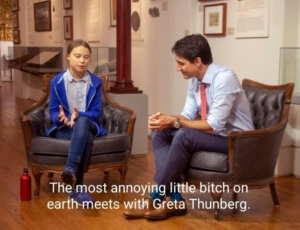