There is a small café near me that has been defying the latest shut down tyranny.  This morning the Evil Troll sent his Brown shirts to deliver a message.  If he continues to defy the government he will lose his health license.  He would no longer be able operate a restaurant, ever.  For the crime of not following the evil, illegal, dictates of government he would receive a life sentence.

Omar Khadr killed Sergeant Christopher Speer, he tried to kill many others.  He built and set bombs all over Afghanistan.  It is likely that his bombs killed several people.  Since he set his bombs where Canadian Troops operated it is possible he even killed Canadians.  We only know about the one he killed with a grenade.

Omar Kahdr is not guilty of serving people soup and sandwiches.  He is guilty of the most heinous crime.  He should have been imprisoned for life.  Instead our government lobbied to get him back to Canada so that he could be released and compensated for his inconvenience.  The Canadian Government considered his crimes to be trivial.

In Canada right now there is no greater crime than disobeying government.  Murder does not even come close.  If Omar Kahdr opposed lockdowns or carbon taxes he would still be in prison.  Instead he is a millionaire while the government threatens to impoverish a small businessman.  Our government is deeply concerned about the long term prospects of murderers.  They have no regard for businessmen or the people they employ.

Have you had enough yet?  You might be asking what you can possibly do about this.  The answer is plenty.  The evil Troll does not go out himself to threaten businesses.  He is far too fat and lazy for that.  He sends his henchmen at Alberta Health Services (AHS) to do his dirty work.  The people who politely threatened this businessman, with a lifetime of poverty and unemployment, live in this community.  It is high time they paid a price for their participation.  They need to be shunned.

If an AHS inspector shows up at any business for personal needs they should be turned away.  Anyone who has participated in this tyranny should be shunned.  If they want to buy anything, a sandwich, tires, or home renovations they should be forced to drive miles to where no one knows them.  They should not be welcome anywhere for any reason.

But they are just following orders right?  So were the guards at Auschwitz.  I know many people will think that comparing AHS to Nazis is unfair hyperbole but I don’t see it that way.  The Nazis did not start big.  They started by seeing what the public would let them get away with.  Right now we are letting AHS get away with anything they want.  Do you really think allowing them to threaten business owners will not escalate?

The policies handed down and enforced by AHS have already killed people.  Governments all over the world are guilty of the same crime.  The Nazis terrorized and killed.  AHS terrorizes and kills.  Right now the only difference between the Nazis and AHS is the speed at which they are killing. 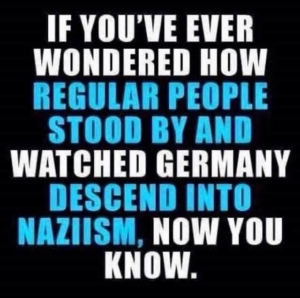 Subscribeto RSS Feed
The Hard Truth is, The Flu by any other Name is still just the Flu.It is Time to Don the Tin Foil Hat
Scroll to top