Most people are not able to look at data or events and predict a probable outcome.  Before vaccine passports were put on a single cell phone I warned what a bad Idea that would be.  It gives the Government the ability to cancel your vaccination status at any time for any reason without notice.  This reporter found that out the hard way.

She was following the quarantine for isolation after a positive test.  Unfortunately for her the cellphone app had different rules that she only discovered when she went to travel.  This is what it took for this “investigative journalist” to understand how fragile and unforgiving this system can be.  Vaccinated people are only one dead cell phone battery away from being unvaccinated.  Her incident has forced her to re-evaluate her stance on vaccine passports.  Now she thinks they should be dropped; not because they serve no public health purpose but because they have been inconvenient for her personally.

The same goes for this gentleman.  He has had enough of Doug Ford’s stupidity and very eloquently demands his resignation.

I am glad that these people have finally come around but I still need to ask what took you so long.  When it comes to vaccine passports it is obvious that allowing the government to control your movement is an enormously bad idea.  As for all other aspects of our COVID response plan, we should not be surprised that they have failed.  They had no chance of succeeding in the first place.

The SARS COV 2 virus, like all respiratory viruses, is airborne.  The implications of that are not hard to understand if you take just a moment to think.  Catching droplets makes no difference, the virus is circulating freely in the air and is much too small for almost any mask to stop.  Therefore masks cannot work.  It also means that anything short of a complete lock down will not work.  By complete lockdown I mean welding people in their homes.  Keeping grocery and big box stores open allows the virus to continue to circulate.  In fact partial lockdowns likely increased the spread.  Funneling everyone in to places where the virus was guaranteed to be circulating does not limit transmission.

Lockdowns and masks had no chance of working.  We did not need multiple lockdowns and 2 years of enforced masks to figure that out.  Ignoring all of this in the faint hope it might help until we get a vaccine was also a bad strategy.  We had no reason to believe we would ever have a vaccine.  There has never been a successful coronavirus vaccine; in fact there has never been a successful vaccine for any RNA virus.  We should not have needed to inject everyone 3 times to figure this out.  The vaccines, predictably, have not worked and finally people are starting to notice.

First we were told that the vaccines would stop transmission.  Anyone who bothered to read about how they worked knew that was a lie.  It did not take long before the numbers bore that out.  Vaccinations were always accompanied with a surge of infections.  The excuse given was this was all due to unvaccinated people.  Somehow the small minority of unvaccinated were spreading the virus far more quickly than when no one was vaccinated.  The narrative collapsed when vaccinated people started testing positive.

Next we were told that even though vaccinated can be infected and spread the virus, Vaccination was still imperative because it protected you from serious illness and death.  That narrative is now also imploding.

In Ontario now 76% of hospitalizations are vaccinated which matches exactly the vaccination rate in Ontario.  The vaccines obviously do not reduce your chance of serious illness if you still wind up in the hospital.  But what about death?  Do the vaccines still decrease your chance of dying?  The most recent data out of England shows no protection against death. 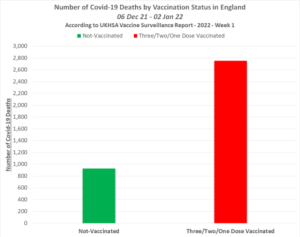 Just over 75% of all deaths are vaccinated people which is roughly equivalent to the vaccination rate in the UK.  Many of these people have had 3 shots and the boosters made no difference.  We should have expected the vaccines to fail and they have failed.  This was just as predictable as lockdown and mask failure.

Despite the extremely high probability that all of the COVID measures would fail, most could not see it.  Most people are like children.  They can’t understand that touching the hot burner is not a good idea, they need to be burnt to find out.  People are now waking up to the fact that that they have been burnt and they are starting to get angry.  How angry do you think they will be when they discover just how badly they have been burnt?  It is not just that they were forced to comply with ridiculous edicts with zero chance of success.  That alone would be bad enough but the whole truth is far worse than that.  The whole truth is that we complied with ineffective restrictions to combat a non-existent emergency.

Since March of 2020 I have been cautioning that the official COVID data is suspect.  The PCR test was prone to false positives.  The case number were always grossly overstated as were the COVID deaths.  You can print anything on a death certificate and governments were offering financial incentives to maximize the number of cases and deaths.  Some people in the media are finally exposing this fraud. 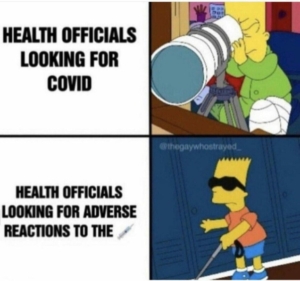 It took almost 2 years but reporters are finally starting to notice there is a difference between dying with COVID and from COVID.  Unfortunately the media has a long way to go when it comes to revealing the truth.  Much of the media is still firmly under government control like CTV in Calgary. 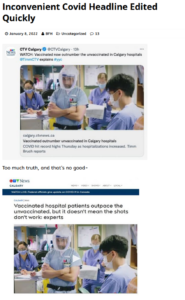 There appears to be some internal strife at CTV.  Someone made the mistake of printing the truth rather than spinning it.  Management quickly stepped in to quash any effort to question the narrative.  I am certain the person who wrote the first headline is looking for work this morning.

People are starting to realize that nothing has worked and they are angry.  How angry will they be when they realize government along with their media partners controlled and manipulated data to manufacture an emergency? The virus was not fake but the emergency was.  Hopefully it will not take another 2 years for this to dawn.  When it does dawn I hope people question why the government would bother to fake an emergency.  Perhaps this simple graphic can help. 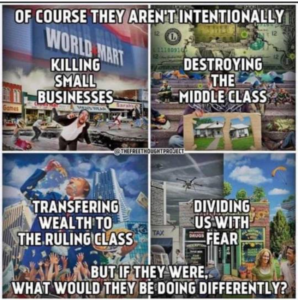 There is no benign explanations for any of this.  Lockdowns, Masks, vaccines, and vaccine passports have only negative impact on overall public health.  When people finally understand government policies maximized deaths to distract us from their true purpose, anger will boil over.  It is only a matter of time before everyone realizes demanding the resignation of a fat simpleton is not nearly enough.  Prisons must be built to deal with the people who caused this or it will never end. 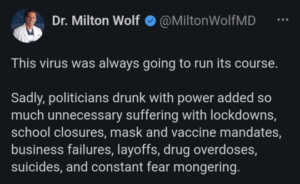 Subscribeto RSS Feed
Omicron is another Lab Generated Government Wielded Weapon.You don’t need Logic to Know all of this is Wrong
Scroll to top