18 months ago I started this blog because, quite frankly, government and media just were not telling the truth about COVID.  This is and always has been a completely manufactured crisis.  I naively believed that I could present accurate information and people would get over their fear and just say no to government.  I was wrong.  Government is still playing the same stupid game and people are swallowing the bull$h1t.  Scotland has once again closed schools over rising cases.

‘If the authorities keep looking for this cold they will continue to find it and it will not go away.’

Neil Oliver speaks to Colin Brazier as a number of Scottish schools are forced to close due to Covid-related staff shortages.

Neil Oliver is 100% correct you can find it if you test for it.  All we need to end the plandemic is to stop testing.  Unfortunately this is a lesson we should have learned long ago.  On Dec 13th 2020, I wrote this.

The massive testing we are doing accomplishes nothing other than fueling panic.  The main reason we have so many cases is that we are manufacturing them.

We have not learned a damn thing in the 15 months since I wrote that.  Governments continue to test so that the evening news has scary numbers to report.  Governments are evil, I would expect nothing less.  I did, however, expect more people to figure this out by now.

If you are waiting for government to call an end to this farce and let us get back to normal I have bad news for you.  Government has no intentions of ever letting you go back to normal.  Governments simply have too much time and money invested in this farce to let it go.  This was never about a virus.  It was always about getting us to surrender our rights and distract us from their true objectives.

While vaccinated Canadians have been busy discussing the best way to euthanize unvaccinated the Trudeau liberals are plowing ahead with an agenda they would rather you don’t notice until it is too late.  Call me a cynic but I can’t see how letting Justin Trudeau have digital IDs and Digital currency will be good for anyone but Justin.

COVID will not end until governments no longer need it.  If you are curious about how long that might be you can ask Jagmeet Singh.  Well maybe not Jagmeet, he is really not that bright, but you could ask his script writers.  They would tell you there is a reason the Trudeau Liberals don’t want to face a non-confidence vote before 2025.  In 2025 when elections are outlawed Non-confidence votes won’t be much of a problem anymore. 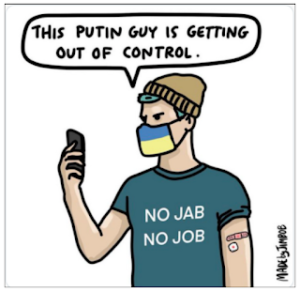 Subscribeto RSS Feed
Justin sets the stage for more TyrannyJacinda all but admits this was never about a Virus.
Scroll to top