Kevin Johnston was arrested in Calgary Saturday morning for attending an illegal gathering.

Kevin Johnston is a candidate for Calgary Mayor.  He has made the news for being bombastic and promising to remove COVID restrictions.  He also promised to punish those who over stepped their authority imposing the restrictions.  Without a doubt, Johnston is a polarizing figure.  Reaction to his arrest has been mixed.  The news anchor this morning was positively jubilant about his arrest.

That is how far our country has fallen.  No one should be happy about this arrest.  People need to forget the name and look objectively at what happened.

All gatherings in Alberta are illegal right now.  Bizarre but true.  This should never happen in a democratic society, yet here we are.  By outlawing every gathering the government has made thousands of citizens criminals.  Do you really think that Kevin Johnson attended the only gathering that happened Saturday morning in Alberta?  There were thousands of “illegal” gatherings in Alberta Saturday morning.  How come the only person arrested was Kevin Johnston?

A better question is how did the police know that Kevin Johnston attended a gathering?  The answer is obvious.  The police were following him.  Let that sink in for a minute.  Jason Kenney is using the police to surveil and arrest politicians that do not conform to his will.  This happens in third world dictatorships, and now it happens in Alberta.

Jason Kenney is destroying Alberta.  We are now officially a banana republic.  I don’t care what you think about Kevin Johnston, there is no way that this should have happened.  Jason Kenney stated that Kevin Johnston is a lunatic.  If that is the case, why is the evil troll so afraid of what Johnston might say? 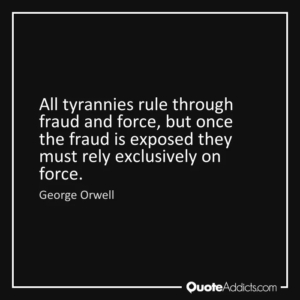