I was sent this video a couple days ago.

Kenney: "While we have to take the COVID threat very seriously, it is currently projected to be the 11th most common cause of death in Alberta this year."

Jason Kenney has had an epiphany.  After 9 months he has discovered that lockdowns don’t work and are more deadly than the virus.  It is too bad no one could have pointed this out to him earlier.  I mean someone other than me.  I sent the letter below to Jason in early April.

Let me start by saying that I voted for the UCP in the last provincial election.  Just a few months ago we were so optimistic with the promise that you could lead Alberta out of the morass that the provincial NDP and federal Liberals had plunged us into.  Then along came the covid 19 virus and we find you following rather than leading; following the lead of the federal government and their social distancing guidelines.  Seriously, if you are going to blindly follow couldn’t you have found someone more intelligent than Justin Trudeau?  In our country alone there are at least 37 million candidates.

I have a thought for you, why don’t you lead?  Why don’t you become the first Canadian, and one of the few leaders in the world to buck the trend and actually do something effective rather than trying to lock people in their homes.  I am not an epidemiologist but I am someone who knows how to plot data and is curious enough to look at the data for myself.  In case you have not seen it here is data from John Hopkins University up to April 10, 2020. 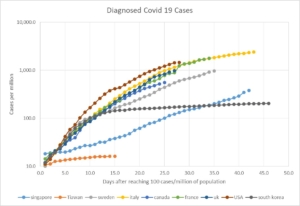 Nothing that I am being told about this viral outbreak is apparent in the actual data.  Countries that are practicing social distancing are actually doing worse than countries that are not.  Singapore started social distancing 13 days ago and their trend is unchanged from when they were not.  You only have to think critically about social distancing to understand that it won’t work.  People still have to go out to shop for necessities.  They will still contact the virus in the one place large numbers of people congregate regularly, the grocery store.

Even if social distancing were to work all it does is kick the can down the road.  The only way to stop a viral outbreak is to expose everyone to it, either through a vaccine or everyday life.  We don’t have a vaccine so your choice is very easy.  This might be a scary option but as you can see from the data, despite what the models predict, no country is trending higher than 1% of their population being infected.  It does not matter when you lift the restrictions the virus will still exist and people will still get sick, I am sorry but that is reality.

With each passing day we get more data, specifically data that shows hospital admissions and total mortality are not outside the bounds or normal.  There is a lot of creative accounting right now that makes covid 19 look scary but when we finally get the total mortality from all causes it will be evident that this year is not exceptional.  We cannot shut the economy down every cold and flu season.

The longer you wait to act the worse you will look in hindsight; so why not get in front of this now?  Here is some advice, take it or leave it.  Declare victory.  Tell people that because of the measures you have taken we can start to remove restrictions.  Anyone who looks at the data would know the part about the effectiveness of the measures was a lie but would support it whole heartedly.  There are a lot worse lies that you could tell right now, like telling people that social distancing works and keeping them terrified of leaving their home or even contacting another person.  Start phasing out restrictions over the next week while assuring people you are putting in new stronger protections for seniors and high risk individuals.  Then please actually follow through on that one.

I understand why we got here.  The media created a panic and you could not be seen not addressing a crisis, but enough is enough.  You are doing far more harm than good.  No one voted for you with the expectation that you would destroy our economy, we already had Justin for that.  Please don’t give me old tired line that you are following the advice of experts.  When all you have is a hammer everything that you see looks like a nail.  An epidemiologist only sees the epidemic he does not see the damage he is doing.  He does not see the whole picture that is what we hired you for.  I understand the need for the crutch of experts but if you are going to use experts couldn’t you seek out ones that did not have a history of screaming the sky is falling?  Seriously we have been to this movie before.  How many times does the sky not have to fall before you stop listening to these lunatics?  Your first clue that they were wrong was that Justin Trudeau agreed with them.  Here is another bit of advice when faced with something like this in the future, ask yourself “what would Justin do” and then do the opposite.

There are more people than just me who understand that we are headed in the wrong direction.  We have quite a large electronic discussion group.  We search out and discuss the real data, not the scary simulated data.  If you want to know how ordinary Albertans are thinking I would be happy to forward our discussions to you.  Here is my last bit of advice, instead of consulting “experts” why don’t you consult people like the ones in my discussion group.  They are not experts but they all possess something sorely lacking from your current group of advisors; common sense.  I will distribute this letter to them and encourage them to write their own, I have not cced them because not all of them have given me their consent.

In April I pointed out why what we were doing was ineffective and damaging.  Either Jason just got around to reading this letter or it took him that long to figure it out.  The past 9 months have shown that Jason is not the brightest bulb on the Christmas tree and yet he is the first Canadian Politician or Bureaucrat to realize the harm they are doing.  What does that say about the rest our country?

Is Jason the smartest of a very dull group or is there something else going on here?  Jason had his epiphany after the American election.  I had speculated earlier that many left wing government were destroying their economies in support of Joe Biden.  Biden was a single issue candidate and politicians in the west were OK with killing their own people as long as that meant getting rid of Trump.  Alberta joined the parade even though it hurt Jason’s polling numbers.

Albertans were an anomaly in Canada.  Everywhere else in Canada lockdowns boosted the local politician’s popularity, John Horgan rode his wave of popularity to a majority government.  In Alberta Jason Kenney saw his fortunes fall through the phony pandemic.  In contrast to the sheep everywhere else in the country Albertans were not happy with the restrictions but Jason persisted until the election was over.  The minute the US election was over Jason moved to try and recuperate his shattered popularity.  The timing is very suspicious.  Is Jason Kenney just another reliable left wing soldier supporting the cause any way he can?  Or is Jason truly the smartest kid on the short bus?