There is another paper out documenting the destructive nature of lockdowns.  I wish I could stop talking about lockdowns but I can’t stop because the government won’t stop.  Only days ago I posted that most of the UCP leadership candidates think lockdowns are an effective tool that they would use again.  None of these sociopaths should ever be in government yet they are at the highest levels of government.

Lockdowns have been studied to death so nothing in this recent paper is new.  They simply pointed out again that none of the non-pharmaceutical interventions (NPIs) worked.  Just because something sounds like a good idea does not mean that it is a good idea.

“The quite reasonable idea (from the point of view of contagion mechanisms) of the effectiveness of social distancing during epidemics is not supported by vast evidence.”

The worst thing about lockdowns is not that we tried them and they did not work; that could be forgiven.  What makes lockdowns so evil is that we had no reason to believe that they would work but we knew damn well how damaging they would be.  The detrimental effects of stress, isolation, and unemployment are well known.  So well know that they can be used to calculate how many people will die because of them.

“By using the known connection between health and wealth, we estimate that lockdowns may claim 20 times more life years than they save.”

I have posted this video before but it is worth repeating.  Governments got the risk-reward ratio inverted.

"We inverted precautionary principle of trying to minimize harm by doing the one thing that we knew would cause harm: lockdowns.. What we do see very sadly.. harms unfolded.. We sit watching devastation that we knew these measures would cause 2yrs ago”
—Oxford Prof @SunetraGupta pic.twitter.com/4fYamssyKr

We knew with great certainty that many people would be harmed by the lockdowns.  We did not know if they would save a single life.  In fact the data already in hand indicated that they would be ineffective.  The virus has animal hosts, even if a lockdown could stop the spread among humans, it would only last as long as the lockdown.  The virus will not go away.  At best you killed people with the lockdowns to just postpone the inevitable.

We are still talking about using lockdowns not because they worked but because they did not.  If anyone in government stops supporting lockdowns it would be an admission of guilt.  They would need to take accountability for their actions.  Their actions killed people and it is far simpler to kill more people than confess guilt.  Vaccination programs continue for the same reason.  We had no reason to believe a successful corona virus vaccine could be developed in months after years of failure.  We also knew the potential of disastrous consequences of rushing a new medication to market.  Once again we inverted the risk-reward ratio and once again people died because of it.

I wish I lived in a world where politicians found apologizing for mistakes more palatable than continuing with them; especially when those mistakes are killing people. 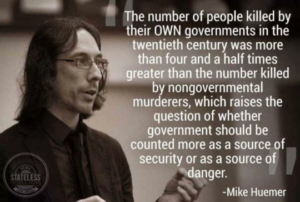 Subscribeto RSS Feed
Virtue signaling is not Power, it isn’t even VirtuousBlindness willful and otherwise
Scroll to top