― Elena Gorokhova, A Mountain of Crumbs

I have also seen this quote attributed to Aleksandr Solzhenitsyn, either way it perfectly describes how a communist society works.  Everything is a lie.  Of course Communist governments are not the only governments that lie.  All governments lie.  At this point I am certain that there is not a single government in Canada capable of telling the truth.  Even if only by accident.

Not all governments lie equally.  There is a spectrum.  The sizes and number of lies are both proportional to how left leaning the government is.  Canadian Governments are very far left so the Lies are large and frequent.

The real difference between communists and “free” societies is not that the government lies, it is that everyone lies.  Citizens in communist societies were forced to lie all the time.  They were forced to show outward support for the government.  This way no one could tell if you were an acolyte or a dissenter.  You did not dare let anyone know what side of the line you were really on.  Not even your family and friends.  There was no way of knowing whether they might report you.  Lying was an essential survival skill.

Of course this was by design.  If the government can make everyone lie then you cannot trust anyone.  It is hard to gather in groups to discuss ways of changing your government if there is no trust.  I have discussed this before, the easiest way to control a group is to separate them as individuals.  The 2 best tools for that is to sow fear and doubt.  The video below is the Australian government sowing fear.

DON’T ACT LIKE A HUMAN. DON’T TALK TO YOUR FRIENDS, EVEN WHEN MASKED. DON’T BE FRIENDLY. THIS IS NOT THE TIME. pic.twitter.com/iiPgz2D8Bb

Don’t you like her message?  Now is not the time to be human.  This is a familiar message to everyone living under COVID tyranny.  Do not meet and speak to each other.  It could be unsafe, mostly for government.  Every government has their own ministry of fear but to cover all the bases they also have their ministry of doubt.

The ministry of fear produces videos like the one above.  The ministry of doubt produces rules that turn us all in to liars.  Rules like only allowing restaurants to serve family units at the same table.  Many restaurants chose strategic locations near places of employment.  They often pay higher rent for these locations.  Their business model is built around coworkers dining and drinking together.  Any of these restaurants could not re-open without breaking the rules.  The restaurants and their customers were forced to lie about their dining relationships.

I had my own run in with the ministry of doubt yesterday.  I got my hair cut at a Barber Shop in British Columbia.  BC is a place I visit often and I have been to this shop many times.  Under the COVID rules the Barber is obligated to force a mask on me if I am not completely vaccinated.  I was tempted to be a communist.  By that I mean I was tempted to lie.  But if I did, I would be lying to a barber I have known for years.  I chose to be a capitalist and tell the truth.  That is the point of all the senseless rules.  They want us to lie.  Governments would love it if lying became second nature.  Then our slow conversion to communism will be complete.  This is not, and never has been, about a virus. 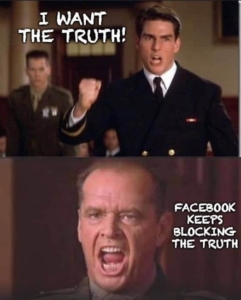 Subscribeto RSS Feed
Good News and Bad News for Britons after their Fake Freedom Day. We Must hold People Accountable Before the Next Lockdown
Scroll to top