There is now a published Canadian study concluding that Lockdowns don’t work.  They looked at the effect of lockdowns in the 5 largest Canadian provinces that accounted for 95% of all cases.  Here are their conclusions.

Overall, our analysis provides little evidence that banning public gatherings, closing schools and universities, placing stay-at-home orders, controlling travel, and restricting business hours had any obvious association with reducing the growth of SARS-CoV-2 cases in Canada—an observation that aligns with those of previous pandemics.

Lockdowns had no measurable effect on transmission.  It is almost as if viruses have no regard for the authority of government.  It is obscene that we have gone through 2 years of lockdowns when they did not work and had no chance of working; something that we have known in Canada since 1918.

In Canada in 1918, one report noted, “Many small towns attempted to isolate themselves with complete quarantines, reminiscent of medieval attempts to stave off plague, in which no one was allowed to enter or leave town. No one was allowed to buy railway tickets to these towns and passengers were barred from disembarking at them. The Canadian Pacific Railway reported 40–45 towns closed in the province of Manitoba during the height of the epidemic; the Canadian Northern line bypassed 15 more. The Alberta Provincial Police guarded roadblocks on major highways in the Province of Alberta in an effort to keep influenza from reaching three prairie municipalities. These measures were nonetheless ‘lamentably inefficient in checking the spread of the disease.’ Quite simply, isolating individuals and families or quarantining entire communities did not work.”

It is long past time for us to admit that lockdowns were not imposed to control the spread of the virus since governments could not help but know that they did not work.  Even without the historical evidence common sense would tell you restricting the movement of healthy people will have no impact on transmission.  Lockdowns were imposed to make us poor and willing to accept increased government control over our lives, livelihoods, and bodies.

Governments are carefully following a well scripted plan and as this commenter points out they are willing to kill as many people as necessary to get what they want.

LOCKDOWNS HAVE KILLED AND WILL CONTINUE TO pic.twitter.com/a8JQ35s0Te

This is not and has never been about a virus. 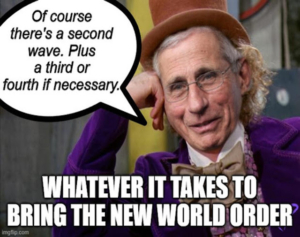