My brother sent me this interview this morning.  I don’t know the interviewer but I have seen Dr. Madej before.  I do not know much about Dr. Madej except that she is a vaccine critic.  She is among a group of MDs who have been openly critical of the experimental mRNA vaccines.  Dr.  Madej is again critical of mRNA vaccines but the interview covers a lot of non-vaccine ground as well.  The video is below.

The first half of the interview deals with mRNA vaccines and other injectable Nano technology but I want to start with a very important non-vaccine point that she makes. Isolation kills.

It is a well-documented fact that isolation on its own causes mortality.  This is very apparent in dementia patients.  During the Lockdowns there was significant excess deaths for dementia patients that did not have covid.  Denying people human contact is stressful and can be deadly.  Basic science also says that a healthy immune system needs to be constantly challenged by encountering foreign organisms and even pathogens.  This does not happen when you isolate people.

Isolation, panic, and stress are all things that weaken immune systems.  This is well established science.  If you wanted to compromise the immune systems of millions of people you would

Doesn’t all of this sound ominously familiar?  Lockdowns and restrictions that keep people apart are a self-fulfilling prophesy.  If you keep it up for long enough people will die.  Then the government can say “I told you so” and use those deaths as an excuse to continue with the lockdowns.

Lockdowns kill and so can Vaccines.  Dr. Madej covers some familiar ground about mRNS vaccines.  mRNA vaccines have been under development for more than 2 decades.  They have never been approved because they have never been able to get past the animal testing phase.  It was some small detail about 100% of the subjects dying that proved to be a bit of a sticking point.

mRNA Vaccines have now been approved.  So how did they get past the animal testing phase?  Simple, they just skipped it and went straight to humans.  Even those tests were abbreviated.  AstraZeneca, Pfizer, and Moderna all conducted human trials on volunteers that they tracked for 2 months.  2 months is a very short time but they reported no deaths in that 2 month period.  On the strength of those short trials the Vaccines were approved for emergency use.

The vaccines have been rolled out for 4 weeks now and already countries are reporting significant death totals.  Including one of the most famous athletes of all time.

To be fair many of the people like Mr. Aaron were very old and may have died anyway.  Although preliminary investigations in Norway, where now 36 people have died, attribute half of the deaths to the Vaccine.  How could 3 studies show zero deaths in 2 months when we now have dozens of deaths within 1 month?  Well the devil is in the details and Dr. Madej has some disturbing details

None of the studies included significant numbers of older subjects.  Only Moderna accepted older subject who were not in good health.  But Moderna still reported no deaths right?  They report no deaths but an unusually high percentage of the older subjects “dropped out” of the study.  Translation; we only tracked the patients that did not have a problem.  Some of the elderly subjects dropped from the study may have died; we just don’t know.

Moderna has had a close relationship with the Gates foundation since the company was founded.  It would not be like old Bill to lie to us would it?

The only people who need this vaccine are elderly people in poor health.  People in that category were either absent or mysteriously dropped from the studies.  My parents have already passed.  In a way that is a good thing because I don’t have to help them make a very difficult decision about the Vaccine.

The problems with the Vaccine may not just be limited to those who truly need it.  My understanding is that the animals in the study were fine at first.  The deaths did not happen until much later.  It is not surprising then that a 2 month study did not show any problems.  The $64 question is what will happen next fall when covid returns?

The question about whether or not to take the Vaccine is a difficult one.  Remember by the established standard these Vaccines have not been tested.  They should be considered experimental.  If you decide to take the vaccine you have really decided to be part of the experiment.  I am OK with that.  I am a big believer in personal choice and responsibility, but the choice should be an informed one.

The math shows anyone under 70 in good health really has no compelling reason to take the vaccine.  People over 70 in poor health do have a compelling reason to be vaccinated.  Unfortunately the Vaccines could be more deadly to that group than the virus.  I think if I was in that group I would opt for daily vitamin D and Ivermectin before I took part in an experiment. 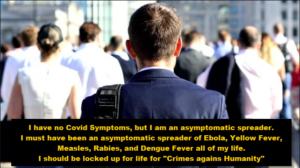 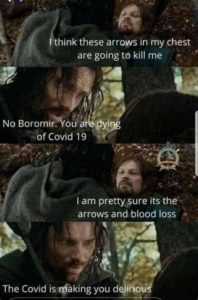 Subscribeto RSS Feed
Deena Hinshaw Missed the Memo and the Data, But Not Her PaycheckThe University of Alberta Proves Itself to be a Disreputable Source of Vaccine...
Scroll to top