Once again I called it.  Jason Kenney did not increase restrictions yesterday.  Even though Alberta is seeing the same rising cases that spurred BC, Saskatchewan, and Ontario to ramp up lockdowns.  John Horgan, Scott Moe, and Doug Ford have been lawlessly depriving their citizens of rights for 12 months now.  Their political fortunes have risen because their populations enjoy subservience.  See the latest Angus Reid poll results below. 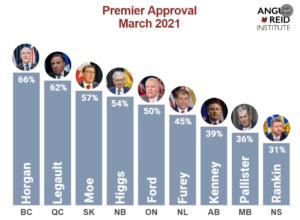 This poll is actually flattering to Jason Kenney.  A new poll came out just this week that paints an even bleaker picture for Jason Kenney.  Only 8.3% of Albertans approve of his performance.  Deena Hinshaw fairs a little better at 15.5%.

Albertans are also fed up with lockdowns and restrictions. 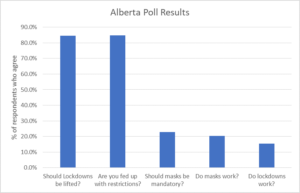 The pollsters admit their poll is not scientific but 42,000 people responded so it cannot be ignored.  You can see the poll results here.

Albertans do not believe the propaganda.  Even the media fear campaign has not brought them around to the government position.  Remarkably, Albertan have figured out that eliminating rights and personal responsibility has no affect on viruses.

Lawless Tyranny has never been as popular in Alberta as other Canadian provinces.  Jason has been very slow to understand this.  Jason is slow to understand anything.  Thankfully, someone has finally explained it to Jason.  He is just not sure what to do about it yet.

Just once in this farcical Pandemic I wish I was wrong.  I predicted Jason Kenney would not follow other provinces because he is in trouble politically.  This is not the first time I have been able to predict behavior by considering politics and ignoring the virus.  A cynical person might believe lockdowns are political, not medical, interventions.

I am not the only person to notice that lockdowns serve purposes other than stemming an outbreak.  According to this doctor the purpose of lockdowns are to force you to get the vaccine.

Dr. Leana Wen is very concerned that if we lift lockdowns before everyone gets vaccinated, people will figure out we do not need the Vaccines.  I wonder how much money the good doctor stands to make off vaccines.

Alberta’s evil Troll is in an awkward position.  He risks more political damage if he increases lockdowns but lockdowns are the primary weapon to force vaccinations.  Albertans attitudes about the vaccine make this a huge problem for the evil Troll.  More than ½ of Albertans do not intend to be vaccinated. 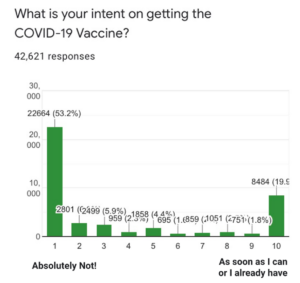 Time is running out on Lockdowns.  In Belgium the Supreme Court has ruled that the government has been illegally extending emergency measures.  Because the emergency extensions are illegal the restrictions are illegal.  The court has ordered that all restrictions must be lifted immediately.

Don’t hold your breath for this to happen in Canada.  Our courts are horribly political.  Judges in Canada are simply unelected politicians in black robes.  Politics in Canada are horribly left wing and so are our courts.  That is why they always err on the side of tyranny.

Still as the rest of the world comes to their senses it will be difficult for Canadian Politicians to cling to lockdowns.  Even people who have elected Justin Trudeau twice are not that stupid.

Subscribeto RSS Feed
Stupid is as Stupid does, of Course I mean Doug FordThe Bureaucrats are in Charge
Scroll to top