Lockdowns clearly did not work.  If you are still stupid enough to believe that they did please explain this plot to me. 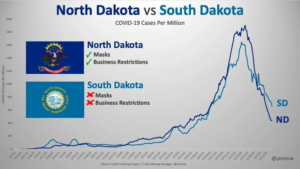 South Dakota did absolutely nothing.  Governor Kristi Noem refused to lock down because lockdowns violate constitutionally guaranteed rights.  North Dakota did lock down.  After seeing this plot do you think the people of North Dakota are happy about being locked down?

The failure of lockdowns was completely predictable.  Lockdowns failed during the Spanish flu for the same reason they failed during COVID.  People who are not sick do not spread a virus.  Restricting their movements will not change anything.

Before the first lockdown was announced any sane rational person knew that they would only make things worse.  Lockdowns would have no effect on the virus but they would be highly damaging to humans.  The stress of isolation and unemployment have health impacts.  This phenomena has been studied to death in the past with the first known experiments happening more than 1000 years ago.  The bastards that imposed lockdowns knew damn well that lockdowns would harm people.

The science clearly says that the people harmed most by lockdowns are children.  Children’s brains and immune systems need to be challenged to develop properly.  Keeping them at home exposed to the same external stimulus stunts the growth of both systems.  We have already measured an incredible 22 point reduction in infant IQs and now we are starting to see the immune system retardation.  There is an outbreak of hepatitis affecting children in 14 countries.  Doctors are forced to admit that this strange outbreak could be the result of 2 years of lockdowns.  Lockdowns suppressed immune system development in children.  Good thing we followed up with the vaccine to completely eliminate children’s immune systems.

In March of 2020 the science was already clear.  Lockdowns have little effect on the virus but are devastating to public health.  Now after 2 years of stupidity we are see the problems yet people still want to deny the truth.  Watch the stunned look on faces when this young man simply states the bleeding obvious.

Not to worry though, once again the government has come to our rescue.  We have finally figured out why lockdowns did not work and it has nothing to do with science.  Lockdowns did not work because of the world’s organizational structure.  Watch as this moron explains how things would have been so much better if we just gave up national sovereignty to a group of unelected, bureaucratic, sociopaths.

WHO pandemic treaty serves as a backdoor to global empire:

The real problem is borders and elections; if we could just eliminate them no one would ever die in cold and flu season.  We have tried this in the past and it is true cold and flu season was a relatively small problem compared to deaths from sudden, impactful, lead poisoning.

So our health will improve if we just give control to a single tyrannical group and we are in luck; we already have qualified applicants.  Tedros and the WHO have already applied for the job.  I feel my immune system strengthen already.  If I get too healthy I might need to hold it back with multiple jabs of mRNA.

It is a brave new world.  I hope you like it.  After all you voted for it with your silence in March of 2020. 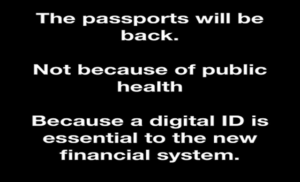 Subscribeto RSS Feed
Political Careers require COVID to never endThis was never about a virus. It has always been about Freedom.
Scroll to top