I came across this article this morning.

The Vancouver SUN reported that the closures were due to “unforeseen limited staffing availability.”  The BC Health authority just fired hundreds of staff for not being jabbed and this government propagandist wants us to believe the staffing shortages were unforeseen.  I mean really who could have seen this coming.  Firing 10 to 20% of your staff for political reasons should have been easy right? 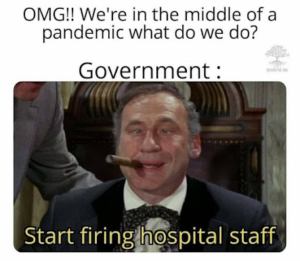 I sincerely hope several vaccine Nazis die during the 1 hour ride to the emergency room.  Canadians by and large have supported every Tyrannical measure implemented by government.   Those who supported this, or sat by and let it happen truly deserve what is coming.

While Canadians are still sleep walking through the annihilation of their lives and human rights people elsewhere are starting to wake up.  About a week ago I pointed out that all-cause mortality is up in Europe.  Below is an article pointing out the same thing is happening in the US.

The US is on track to have as many COVID deaths this year with vaccines as last year without vaccines.  On its own that would be damning for the vaccines but it does not stop there.  Deaths due to all causes is way up.  The Jab is a versatile killer.

People in the US are dying in large numbers yet no significant politician has died.  It is almost like none of them took the Jab.  They would not have lied about their vaccination status, would they?

Subscribeto RSS Feed
Thanks to Politicians Air Travel just got a lot less Safe.Albertans are being Played by their Government
Scroll to top