Last week Jason Kenney abruptly announced then end of almost all the remaining COVID restrictions.   COVID will now be handled the same way as influenza.  No more quarantining healthy people just concentrate on helping the sick.  This sudden re-surfacing of sanity in Alberta triggered instant condemnation from all the insane parts of the country.  That would be the rest of the country and entire federal bureaucracy.

I was not surprised by the ridiculous response from the media and other governments.  However I was surprised that Jason Kenney did this in the first place.  It is completely out of character for him.  As I have pointed out multiple times, Jason Kenney is an evil p%#&k.

At first I thought this was just part of the same great reset plan.  Give us a little freedom, ramp up the testing, and then blame rising cases on the unvaccinated.  Lead the public to demand vaccine mandates and passports.  Viola, we now surrender our freedoms forever and all it took was for us to get a taste of freedom.  Ironic right?

To me this was the most plausible explanation until a friend sent me this video.  The video is an interview with Patrick King.  Patrick received a $1200 fine for believing he had rights.  Patrick decided to fight the ticket by challenging the emergency declaration.  The first video is the whole 17 minute interview.  The second 2 minute video I found this morning.  It has been cropped to show only the bombshell part.

Wow, am I relieved.  I thought I might have been wrong to call Jason Kenney as an evil p$&@k.  I was not wrong; Jason Kenney is still an evil p&$#k.  He is just smart enough to know when to run and hide.  The restrictions were only dropped after the Alberta government was forced to admit there is no justification for the emergency declaration.  Dropping the regulations is a smoke screen to cover guilt.  Jason hopes people will be so happy about regaining their freedom than they will not care why they lost it in the first place.

He might be right, some Albertans are very happy about this turn of events. 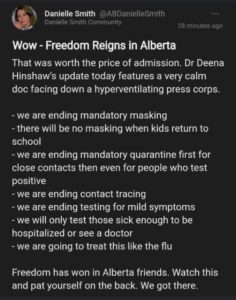 I am sorry but I think the celebration is a little premature.  Why we lost our freedom is just as important as re-gaining our freedom.  The people who did this are still in charge.  They still have the power to do it again.  If you think they would not dare you are sadly mistaken.  They have been dealt a setback but they will learn from it.

The Alberta government lost this case because they were arrogant.  They did not prepare a prosecution.  The plan was to rely on the judge to ignore the law.  Ignoring the law is something Canadian judges do regularly.  The government was certain they could count on the judge to support COVID tyranny.  After all this was not the first time an Albertan challenged the emergency declaration.

Weeks ago I discussed how John Carpay was representing one of the Christians Jason Kenney is persecuting.  John Carpay’s plan was to challenge the emergency declaration.  The government lawyers told that judge 6 weeks was not enough time for them to prove there was an emergency.  The crown lawyers should have been told to prove the emergency or drop the charges.  Instead the judge did what most judges in Canada would do.  He ignored the law and all common sense.  Mr. Carpay was told he could not challenge the emergency declaration.  That defense was just way too inconvenient for the government.

Patrick King deserves a lot of credit.  He has done more than most against overwhelming opposition.  But the reality is that luck was the deciding factor in this case.  Patrick King walked into court that day and discovered a unicorn.  He found a Canadian judge more concerned about upholding the law than advancing a totalitarian agenda.

Determination and incredible luck won a great victory for all Canadians.  But one battle does not win a war.  It is not enough for Jason Kenney to cut and run.  He needs to be punished.  And what about Deena Hinshaw?  She was so arrogant and dismissive of Patrick’s rights she did not even appear in court when subpoenaed.  Her Medical license needs to be pulled and she also needs prison.

This verdict was over 2 weeks ago. A bombshell admission like this should have been the lead story in every newspaper and on every TV broadcast.  Yet it wasn’t.  It did not get reported until an independent journalist picked up the story.  The media can’t argue it was not important.  The federal government certainly thought it was important.  Why else would they send the DOJ 3500 km to intimidate Patrick over a $1200 fine?

They can’t even claim they were not aware.  Chris Sky posted it on twitter the day of the trial.

PAT KING COURT CASE RED DEER ALBERTA … not ONE politician will touch this kind of government corruption. But we expose it to the world. pic.twitter.com/XvTpZbRHYN

Chis Sky even correctly predicted that the government would resort to intimidation and procedural tricks.  Chis Sky is some sort of COVID Nostradamus.  He is batting 1000 while Deena Hinshaw is 0 for 18 months.  Maybe Chris Sky should be our Chief Medical officer.  I might be giving Chris too much credit.  His predictions were not that hard to make.  All you need to do is start with the assumption that Politicians, bureaucrats, and media are evil and you can’t go wrong. 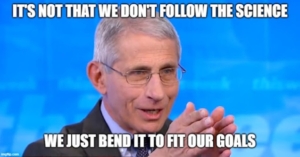 Subscribeto RSS Feed
COVID Vaccines are Snake Oil.Yearly Toxic Injections or Vitamin D supplements, I know which one I would ...
Scroll to top