He did not use those words exactly but I would guess it is difficult to admit their level of guilt.  Western governments have done nothing but lie and break the law for the last 18 months.  There was no way they could have gotten away with what they have done if we had a functioning news media.  The news media has been complicit in all of the government’s crimes.

There is no way this farce would have lasted 18 minutes let alone 18 months if reporters asked even the most basic questions.  Questions like.

There are hundreds of good questions that could have been asked.  The government would not have been able to answer any of them.  Why were none, and I mean absolutely none, of them asked?  Take this interview for instance.

Joe Biden’s top covid advisor just went on CNN and admitted the masks people are wearing don’t work against covid. As I’ve been saying, this is all just cosmetic theater. pic.twitter.com/bB58Up5GXN

This Biden official just admitted that the government is fully aware that cloth masks do not work.  This is a stunning admission.  The follow up questions were obvious and devastating.

Of course none of these questions were asked.  The reporter and everyone with access to his ear piece just accepted that we should all walk around wearing respirators.

Thankfully there have been a few outliers.  Media personalities too well established to cancel and small independent organizations.  Tucker Carlson is too large to stop.  He has Fox’s highest rated program.  No doubt the lefties at Fox hate Tucker but they put up with him because of all the cash he generates.  Lately Tucker has been questioning the COVID narrative.  His monologue this week touched on things I have been discussing on this blog for over a year now.  Tucker is a little late to the game but it is great to have him now.

The roots of communist totalitarianism run deep in Canada.  Prominent Canadians openly express admiration for communism.  This group includes 2 prime ministers, albeit from the same family.  In some countries admiring mass murderers would make you a social pariah but not in Canada.  The Canadian media fawns over these tyrants.  That’s what makes Rebel Media such an anomaly.  They are a Canadian media company not staffed with communist sycophants.

Rebel Media has consistently questioned the COVID narrative and even collects money to pay the fines for people breaking the ridiculous restrictions.  Rebel Media is now branching out internationally.  Here is report out of Australia.

MUST WATCH: A priest in NSW has made one of the most compelling arguments against lockdowns.

Our camera crew at Sydney's Freedom Day rally last Saturday captured this incredible three-minute monologue that everyone should see.

Have you heard anyone speak with more clarity about this lunacy?  Sometimes good reporting is just putting a microphone in front of the right person and let them speak.

This eloquent denunciation is why Jason Kenney arrests Christian preachers in Alberta.  They know right from wrong and it is their job to call out evil in all its forms.  In Alberta you cannot call out evil without discussing the evil p$%#k in charge.  Sadly that is true of almost every jurisdiction in North America.  Jason Kenney is undoubtedly evil but he is not in the big leagues with Andrew Cuomo, Gretchen Whitmer, Boris Johnson, and Emmanuelle Macron.

The world is in a perilous place right now.  All it took to get us here was 3 generations of public school indoctrination, a mild flu, and a compliant media.  At this point media apologies are not enough. 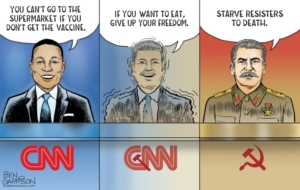 Subscribeto RSS Feed
Vaccine Mandates were a Contingency Plan to Cover for the Inevitable Vaccine...COVID Vaccines are Snake Oil.
Scroll to top