Pushback against COVID Tyranny is slowly building.  Shops and Restaurants are supposed to be closed in the Netherlands but business owners have had enough and did not comply.

Remarkably it looks like the police have chosen to stand down.  As of yet there are no videos of police charging restaurant patrons with batons.

The media has also noticed the change in winds.  Some are still firmly in the government camp like this paper in Utah that is calling for the National Guard to imprison unvaccinated.

But others like the Washington times are now willing to listen to opposing opinions.

Two newspapers in Europe have gone even further than that.  They have apologized for allowing the government to use them for propaganda purposes.

The change in media coverage is welcome.  It is just too bad that reporters had to start collapsing on air for the rest to start asking questions that should have been asked 2 years ago.

In Canada, of course, the media response has been more tepid.  Justin Trudeau owns the major media outlets.  He forks over 100s of millions in tax dollars as bailouts in return for their compliance.  That is why they still dutifully spin everything to support the government narrative.  After several massive protest the Quebec government is dropping the curfew but according to the media it is not because of the protests.  It is because of how successful the curfews have been.

The Quebec media still accepts everything the government “experts” say at face value and broadcast it as fact.  Here is a quote from the article.

“This means the measures we have put in place have worked.”

Let me explain this for the less intelligent members of the Quebec media.  This does not mean that the curfew worked.  All this means is that omicron is very transmissible therefore it has a very sharp infection curve.  Omicron is a fire that burns very bright for a very short time.  We see this even in places that had no curfew.  Omicron is moving through the population so quickly it will soon be over everywhere.

While the legacy media is still in Justin’s pocket the independent media in Canada never was.  Some of them are coming around to the truth that this was never about a virus.

All politicians in Canada are deliberately causing damage and blaming unvaccinated.  This is tyranny 101.  Create a crisis as an excuse to step in and to assume more control.  To keep the public blind to your real intent you need to focus their anger on an identifiable minority.  For the German Nazis that was Jews; for Canadian Nazis it is the unvaccinated.

Most of the world is turning away from tyranny.  Canadians are still comfortable with it.  That is unfortunate but I am still encouraged that some parts of the world are waking up and shaking this off.  At least I will have options for countries to claim asylum in.  When Canadians start to claim refugee status due to government persecution, do you think the Legacy media will cover it? 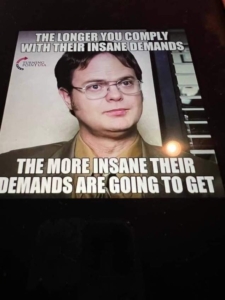 Subscribeto RSS Feed
COVID is curable, Canada is notBoris Johnson’s Bad Behavior could be the path out of Tyranny
Scroll to top