More than once in the last 2 years I have commented that we are now living in some sort of dystopian science fiction movie.  Usually the movie closest to reality is I am Legend.  In that movie society is destroyed my government vaccine mandates.  Vaccinated people turn in to monsters who hunt down and annihilate the few remaining unvaccinated people.

Yesterday in Calgary we got a glimpse of a different movie, Minority Report.  In that movie police violently invade homes and arrest people who have not yet committed a crime.  They do this because politicians produce a list of people that they say will commit crimes in the near future.  Of course it turns out politicians are really arresting innocent people to cover up the politician’s crimes.

Our minority Report moment yesterday was when Chis sky was arrested by police before he could commit a crime.

Due to poor communication and cooperation there were 2 freedom protests in Calgary yesterday.  One protest was in Prince’s Island Park.  The other was scheduled for city hall but moved to the provincial court house because Calgary Mayor Gondek had an injunction to prevent the protest in front of her office.  Mayor Gondek and the courts firmly believe that protests are not to be allowed unless they support the government agenda.  In 2022, If you are not a useful idiot you, have no legal right to protest in Canada.

Chris Sky was walking from the protest in Prince’s Island Park to the court house protest hoping to speak.  That is when Calgary’s worst swooped in for their dramatic arrest.  More cops that you can count came to arrest Chis Sky because they knew he was about to commit a crime.  In fact he was about to commit the most serious crime in Canada.  Chris Sky was about to tell a truth that would contradict government sanctioned lies.  You will not find this law written down anywhere but I can confirm that it does exist.  It is just about the only law that you can be arrested for in Canada.

Canada has 2 very serious problems right now.  The first and smaller problem is the absence of rule of law.  Government and Police are behaving lawlessly.  They are just making it up on the fly to suit their agenda.  You can now be arrested and detained for walking down a sidewalk.

On an absolute basis absence of rule of law is a very large problem, but as I said that is our smaller problem right now.  The big problem in Canada is that 99% of Canadians don’t care.  They sit at home and drink beer while our governments destroy the country.  I fear this problem can’t be fixed. 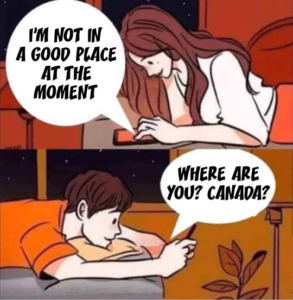