I need to apologize up front for the length of this post.  Sometimes the rants take on a life of their own.  There are a lot of puzzle pieces to put together on this one so bear with me.  I do get to a point and it is all starting to make sense.

For the last few days a story about a Chinese defector has been going around the internet.  The rumor is that this high level defector has information about The SARS CoV-2 virus.  Specifically that it was man made and released intentionally.  You can see one of the stories here.

At first I was very hopeful that the truth would finally come out and that we can hold people accountable.  Unfortunately, the more I think about it the less I believe the story.  I do believe the virus is manmade and released intentionally.  I just don’t believe that they are holding a defector.  Let me explain.

Why I believe the virus is man-made.

The prevailing narrative was the virus jumped from bats to humans in the wet market.  There was just too much evidence that did not fit.

If Chinese people in Wuhan eat bats they are likely to be local bats.  Why would you truck bats 1200 miles away when the people are accustomed to eating the local variety?  I sincerely doubt there were any of the right bats in the market.  If there were, why have they not identified the problem animal?  In similar animal to human outbreaks they have always been able to identify the animal.

Individually none of these things prove the virus is man-made.  Taken together the balance of probability strongly suggests this virus is not natural.

Why I believe this was not an accident.

Again I have no smoking gun but many things taken together makes this the most likely explanation.  Even things that point to it being accidental still make sense if it was intentional.  Like the outbreak starting in China.  The logical argument is that the Chinese would not release the virus inside China.  The reality is that if China wanted to disguise their intentions, it had to be released in China.  If a virus common to Chinese Bats first appears in The US people will smell a rat (or in this case a bat).

We need to accept then that an intentional release makes as much sense as an accident.  How do we tell which it was?   In my mind these are the things that point to this being intentional.

The Chinese have a strong motive to do this.

As TV detectives always say, follow the money.  I have discussed this in previous posts.  No country benefited more from this pandemic than China.  Donald Trump was extremely problematic for China.  No President ever caused them more trouble and he was going nowhere.  Trump was cruising to a second term on the strength of the booming American economy.  China needed to put a stop to that.  Normally they would just bribe the problematic politician.  That would not work with a patriotic Billionaire like Trump.

During the Democrat primaries the 2 least impressive people were Joe Biden and Kamala Harris.  Joe is not smart and the onset of dementia has not improved that.  Kamala is an airhead who has never had an original thought.  Both had strong financial ties to China.  Individually they were poor candidates, together the sum is less than the parts.

Despite that, democrats threw Kamala on Joe’s lap and pushed that old pervert’s wheelchair across the goal line.  Why did they do that?  It is a question of perspective and who was really making the decisions.  If I was Chinese president Xi and I looked at that stable of candidates, I would pick Joe and the Ho.  They are the communist party dream team.  They check all the boxes.  Both are stupid, corrupt, and pre-purchased.

Getting rid of Trump was fabulously good fortune for the Chinese.  Replacing Trump with Biden and Harris is impossibly good luck.  So impossible that it is hard to believe it happened by chance. 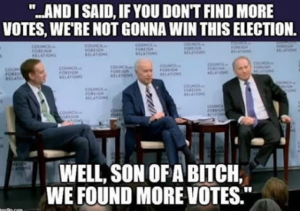 How perfect the SARS CoV-2 virus is for the job.

There is only one reason to do gain of function research.  Gain of function sounds benign until you ask what functions the virus is gaining.  They are not modifying the virus so that it can play the piano.  The new function will always be as a weapon.  Even knowing that, I did not believe this virus was a weapon.  I could not see why anyone manufacture a weapon that did not kill military age men.

I was slow to accept that this virus is a weapon.  Now I can’t think of it as anything else.  I will pause briefly to give my brother time to call and say I told you so.

In order to keep their motives secret the Chinese had to release the virus inside their country and make it look natural or an accident.  If they released a virus that killed military age men they weaken themselves.  Sacrificing thousands of seniors would not be a problem for the Chinese.  It isn’t even in the top 10 of atrocities they have committed.  To communists seniors are a problem.  They cost more than they contribute.  Family ties also need to be broken.  For socialism to work the only support system a person can have is the government.

This is common to all left leaning governments.  Socialist governments in Europe and Canada have been waging a silent war on seniors for a long time.  Why do you think they all insist on assisted suicide and socialized medicine?  Seniors they can convince to die will quickly get a needle.  Seniors that don’t want to die require a different solution.  It is common practice to withhold food to a seriously ill seniors in government hospitals.  A friend of mine knows of a case happening now in Canada.

The SARS CoV-2 virus is not a military weapon it is a terror weapon.  The purpose of terror is fear.  Any virus that kills can instill fear.  A good viral weapon will only kill the right people.  In this case the right people are seniors.  To prevent the virus from killing the wrong people you need a failsafe.  Once again the SARS CoV-2 virus is perfect.  Cheap effective Treatments already exist; Ivermectin and Hydroxychloroquine.  This information just needs to be hidden until after the election.

The Chinese reaction to the outbreak

Immediately the Communists prevented internal travel but they never stopped international travel.  They knew they had a problem and they knowingly exported it to the rest of the world.  That could be seen as careless, rather than sinister, until you consider this.  Most people in communist countries are not allowed to travel internationally.

Was it just bad luck that the small percentage of Chinese allowed to travel happened to have COVID?  Even worse for us these lucky Chinese travelers sprinkled themselves across Europe and North America.  There was almost a strategic distribution of the virus.  Does anyone out there still think that this was accidental?

Why I believe there is no defector

The Chinese did not do this without help.  They had cooperation from the media and foreign governments.  Including senior member of the American bureaucracy.  It was not a coincidence that the media moved in lockstep.  They all ramped up panic with breathlessly ridiculous reporting.  Suppression of treatment information was aggressive and complete.

Governments also coordinated their activities.  They all chose to throw out their existing pandemic response plans and simply lock everything down.  Why would they pursue such destructive and unproven strategies?  I know it is hard to accept that Governments would cooperate with China to remove Trump.  It makes sense when you acknowledge that they are all hard core globalists.

Globalist is the new word for communist.  Boris Johnson, Angela Merkel, Justin Trudeau and all the others deeply believe in the divine right of government.  They are all great reset acolytes.  All of them envision a world where government and a few chosen billionaires control everything.

Unfortunately the reset can’t happen as long as the US insists on remaining an independent nation. The stumbling block was Donald Trump and his America first agenda.  The globalists far prefer Justin Trudeau’s China first, Canada last agenda.  That is way easier to work with.  I doubt it was hard for China to secure the cooperation of those lunatics.  They all wanted Trump, and the prosperous future he achieved, to disappear.

Yes this was a conspiracy; a very large conspiracy.  It required cooperation from many levels of the US Bureaucracy.  That is why I don’t believe there is a defector.  Anyone high enough to have this information would be high enough to know he cannot trust anyone in the US government.  There is no safe harbor for him.  He knows wherever he goes he will just be captured and turned over to the Chinese.  The great reset is on and it is global. 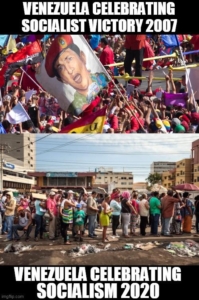