If Dr. Frankenstein could distil and combine the pure stupidity of Ed Stelmach, the rotting corruption of Allison Redford, and the evil communist sympathies of Rachel Notley he would have an elixir to build a truly frightening monster.  Sadly this monster could not possibly cause more damage than Jason Kenney.  Yesterday, Jason Kenney solidified his position as the worst Premier in Alberta History by announcing his second lockdown, 1 week after admitting the first lockdown killed people.

We have been to this movie before.  The first 2 week lockdown instituted nearly 9 months ago is not over and we have started a new one.  Only 1 covid death happened prior to the lockdown and various restrictions.  392 people have died with covid since Jason decided to start protecting us.  There is no evidence the first lockdown worked and Jason wants to go back.  Jason took over Alberta with a huge majority based on all of his tough talk.  Since taking control Jason has shown that his tough rhetoric was empty.  He has accomplished nothing while he followed Deena Hinshaw and Justin Trudeau like a new puppy.

Mr. All Hat No Cattle didn’t even show up for his own press conference.  He was in contact with someone who tested positive so he was self-isolating.  He made a point of telling us that even if his test is negative he will finish the 14 day self-isolation as prescribed by Deena Hinshaw.  This is a page right out of Justin Trudeau’s play book.  Use Covid as an excuse to stay home and play video games.  Justin found the less Canadians saw of him the more they liked him.  Jason is hoping Albertans will appreciate his absence; I certainly would if it was permanent.  Jason is nothing more than a Justin Trudeau wannabe.

Deena and Jason were very concerned that cases and deaths are rising in Alberta.  As you can see below we are now seeing twice as many people die with covid as we saw in April.

Again they were careful not to put anything in context.  In April we are coming out of influenza season, deaths normally drop by 31 per week (7 per million).  If covid deaths were rising at a time when deaths should have been falling we should have seen excess deaths, yet we did not. Where were the 17 deaths per week of covid?  Now we are showing 39 covid deaths per week.  Deaths normally rise as winter approaches.  Even without Covid we should see deaths increasing by 66 every week (15 per million).  The deaths we are seeing now are not outside the bounds of what we should expect every November.  See the plot below 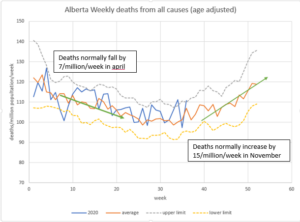 As per usual they took questions at the end of the presentation.  If I had been there I would have been thrown out for asking the following uncomfortable questions.

If there had been a real journalist in attendance some or all of those questions would have been asked.  Instead the first question came from the Edmonton journal.  The media personality (not to be confused with a journalist) pointed out that the new restrictions are similar to, but less stringent than the ones in Ontario that are not working.  Instead of coming to the obvious conclusion that these types of restrictions don’t work he asked why the Alberta Government was not going to go further.  Typical left wing lunacy; pick something that has not worked and advocate for doing more of it.

The subsequent questions did not get any smarter.  We are doomed.  Despite ample evidence to the contrary our decision makers believe they are gods.  The only people allowed to question these self-appointed gods are left wing lunatics, incapable of critical thought.  This is not the blind leading the blind.  It is the delusional being enabled by the deluded.

Subscribeto RSS Feed
It is Cold and Flu Season, Time For a LockdownIt’s Not About a Virus
Scroll to top