2 days after his tearful apology the bloated Tyrant of Ontario is up to his old tricks.  He tweeted this yesterday. 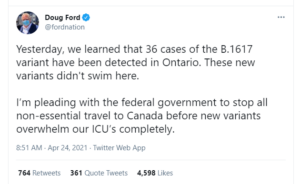 The only thing this waste of human flesh has learned is that it is better if the federal government does the dirty work for him.

So am I being too hard on this Jenny Craig drop out?  Does Ontario really have a problem on their hands?  Ontario’s cases are skyrocketing but like Alberta and BC their deaths are not. 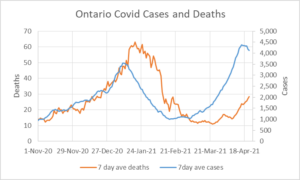 Ontario has far more cases now than the last peak in December but they have far fewer deaths.  The Official COVID deaths have been spiking lately so it is tempting to say that Ontario is on the verge of a catastrophe.  There is one problem.  The uptick in Deaths are coming way too late.  In December Deaths followed cases by 14 days.  That is similar to Alberta and BC.  See the time shifted plot below. 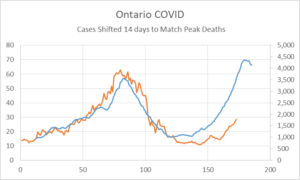 In this late season wave deaths did not rise for 28 days after the cases.  For these deaths to be covid deaths I would have to believe there is a mysterious variant in Ontario that kills people 2 weeks after they recover.

COVID cases and deaths are easy numbers for the government to fabricate.  Total deaths are not.  The plot below is from StatsCan.  According to StatsCan this winter was heavier than normal for Ontario. 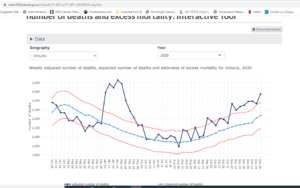 StatsCan shows Ontario was riding slightly above the normal upper limit.  Unfortunately StatsCan has already shown that they are willing to lie to support the government narrative.  I am not willing to take StatsCan at their word.  They seem to produce low expected death numbers to make the actual deaths look scary.

I took the last 10 years of data for Ontario to produce this. 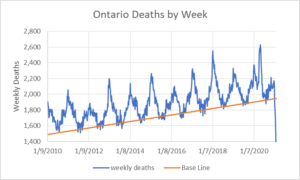 When I flatten this curve to account for Ontario’s growing and aging population I get this. 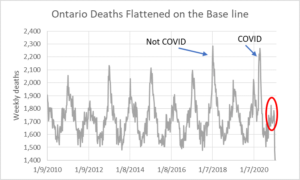 Notice how the Covid spike in the spring was no larger than the regular Influenzas spike in the 17/18 season.  Also notice that the 2020/2021 winter (the red oval) is the lowest cold and flus season in the last 10 years.

When I take this plot then and produce a yearly average with highs and lows I get this. 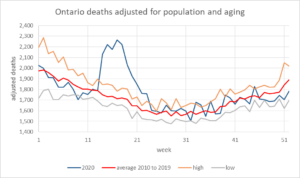 My plot is similar but not the same as StatsCan.  After a significant COVID spike last spring Ontario has just come through a lighter than normal winter.  They were on the low side of normal for the last 2 months of 2020 and have not seen an excess death since June.

Keep in mind that some of the excess deaths in the spring were caused by Doug Ford himself.  Doug Ford did such a good job of spreading panic that care home workers were too afraid to show up for work.

They had to call the military in to help.  Many of the deaths in Ontario were due to neglect not COVID.

The only person on this planet that has been worse than Doug Ford is Andrew Cuomo in New York.  Why on earth is anyone still listening to Doug Ford?