For 2 years Albertans have been told that we need to lockdown and throw people in to unemployment to protect our health care system.  Isn’t this backwards?  I thought the whole point of a Healthcare system was for it to protect the citizens.  Why do we fund a system that we cannot use when we need it?  Why aren’t all Canadians asking that question now?

So how close did we come to overwhelming our system?  Well Alberta has 373 ICU beds and at the peak we had 268 people in the ICU.  72% of the ICU was just for COVID.  I guess we had a problem then, right?  Yes but not the problem that you think.  Our problems once again stem from our government.

That is what government run health care gets you; 80% fewer ICU beds.  We did not shut down our economy and trample people’s rights because of a virus.  We did it to cover up how poorly managed our system is.  Jason Kenney (Premier) and Deena Hinshaw (Chief medical officer) are not just evil, they are incompetent as well.

Unfortunately for Albertan’s those 2 evil incompetents are not done ruining the system.  At the end of this month all Alberta Health services employees must be fully vaccinated.  Jason and Deena are getting ready to fire nurses.  Firing nurses going in to cold and flu season is a very bad idea.  Firing nurses when there is a serious shortage of nurses is an enormously bad idea.  According to StatsCan nursing is the most understaffed occupation in the country.

If this really was about public health they would not be firing nurses.  This is not about a virus.  Australia is not the only country that needs to investigate politicians for corruption. 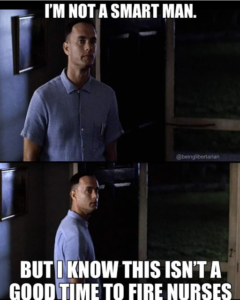 Subscribeto RSS Feed
Jabs and Lockdowns are part of the Same Strategy Will we Slumber until Death?
Scroll to top