Pierre Poilievre has the liberal establishment in Canada running scared.  The Media in Canada were hopelessly left wing even before Justin Trudeau started paying them.  It is normal for Canadian media to attack politicians that fall right of Karl Marx but I have never seen this level of fear from them before.  There is a full court press against Poilievre and he is not even the leader of the party yet.  Obviously the media is determined to nip this in the bud before freedom returns to Canada.

One Poilievre policy that has struck a chord with Canadians is banning government officials from attending WEF meetings.  That would be a serious problem with the great reset so CTV sent a reporter to prove the great reset is just a conspiracy theory espoused by tin foil hatters.  This is no easy task since Klaus Schwab has already published a book on the great reset and our Prime Moron has already declared COVID a great opportunity to reset society.  But as always the truth never deters a Canadian journalist.  Daniel Otis completely debunks the conspiracy by interviewing people who are part of the conspiracy and allowing them to deny there is a conspiracy. Canadian’s need not worry.  According to Daniel Otis and WEF Acolytes the WEF is the same as the rotary club.  People get together to socialize, network, and perform charitable work.  It is merely coincidental that Canadian public policies follow the WEF playbook line by line.  The balkanization of our society with unrestricted immigration and the destruction of our economy has nothing to do with the reset.  No maliciousness just incompetence.

Canadians who are not brain dead understand the Great reset is real and the COVID mandates are part of the reset plan.  This is very problematic for “journalists” working on Justin Trudeau’s re-election campaign.  The mandates are a source of frustration and are driving voters in to Poilievre’s camp.  Not a single journalist in Canada had a problem with any COVID mandates, even the ones that killed people, for 2 years but now they absolutely must go.  The narrative will take a 180 degree turn if Jean Charest wins the conservative leadership.  With a liberal stooge in charge of the official opposition the mandates will once again be essential for public safety.

And lastly if journalists can’t convince people that the WEF is harmless, or convince Justin Trudeau to stop pissing people off until after Charest can win, then Poilievre must be marginalized.  Don’t believe your lying eyes, all those people at a Poilievre rally does not mean he has support.  Catherine Lévesque has iron clad proof that it is all a mirage.  Catherine managed to find 2 people that are not sure they will vote for Poilievre.

Pierre Poilievre has not even won the party leadership and the national media is attacking on all fronts.  Everyday there seems to be a new story pleading with Conservatives to choose someone else.  I don’t know if Poilievre is the real deal but anyone that has mainstream media this afraid is alright in my books. 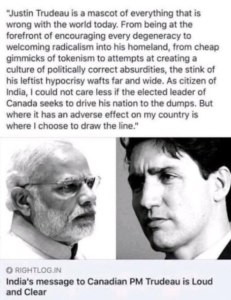