Prime Minister Trudeau is very concerned about women’s rights under Taliban rule.  So concerned he called Hillary Clinton.  Hillary Clinton holds no government office, elected or otherwise.  There is nothing officially she can do.  I must assume then that the Trudeau was calling to see if Hillary could help unofficially.  Trudeau apparently hopes Hillary can arrange the suicides of multiple Taliban leaders.

Yesterday, the White House said that Joe Biden has not taken any calls with world leaders in regards to Afghanistan.

Justin Trudeau stated that he spoke with Hillary Clinton yesterday about Afghanistan.

What is going on? Why is the US President not taking calls but Hillary is? pic.twitter.com/nFn4t97M2K

After watching this I cannot help but wonder why this moronic man-child is concerned about women’s rights in another country.  It is true that under the Taliban women will not have many rights.  The restrictions they will live under are quite onerous.  They Cannot

If they break any of these rules they can be beaten or arrested.  In other words women in Afghanistan will now have to live under the same COVID restrictions as everyone else.  At this point what difference does the Taliban make? 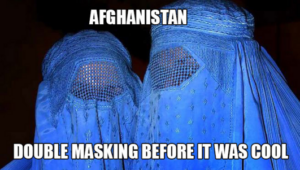 Subscribeto RSS Feed
Aussies have always been Crazy but it used to be a Fun CrazyCOVID Vaccines are not the Solution, They are just another Dangerous Government...
Scroll to top