In the spring of 2020 the world changed on a dime.  The Economy was the best it had been in decades. Life was very good and then western governments openly declared war on their own citizens.  The power of the state was used to destroy the economy and eliminate human rights for all but approved special interest groups.  Human rights were now government bestowed privileges.

Not only had the world changed but we were quickly told to get used to it.  There was no way we were going back.  This was the new normal; mandatory vaccinations, digital IDs in the form of vaccine passports, and restrictions were here to stay.  Lately, however, it seems the new normal may not be all that permanent.  Reality once again is intruding on the childish plans of the left.

The Hubris of the left is always their undoing.  Firm belief in their own divinity makes them incapable of doubt.  They believe that they can bend the universe to their will.  Any decision they make will result in only the utopian consequences they envision.  Unfortunately for these deluded morons the world just does not function like that.

Take the U.S. for example.  The permanent bureaucracy decided that the best way to prepare for a war with Russia was to purge the military of dangerous right wingers and vaccinate everyone to produce some sort of super soldier.  I know it would not have helped, but maybe someone should have explained a couple simple facts to these lunatics.  The dangerous right wingers you are purging are the bedrock of your military and injecting them with an untested substance that suppresses immune system function will destroy battle readiness.

As always with the left they must learn simple lessons the hard way.  They ran out all the healthy conservative farm boys to make way for the lefty soy boys.  Unfortunately it seems the soy boys don’t make very good soldiers.  It does not matter how many boosters you give them, at their core they are still soy boys.  This is a terrible conundrum for the bureaucrats.  How do you go to war with Russia without soldiers?  I am sure their first response is to pen an angry open letter to Vladimir Putin but in case Putin is unmoved by the woke ideology there is a plan B.  The most intelligent of this incredibly unintelligent group has decided it might not be a good idea to fire soldiers who are already battle ready.

Frankly I am a little surprised anyone in this group was able to figure out that highly trained military operatives might come in handy when your Allies are accelerating the onset of an unnecessary war.  War is the most extreme example of reality intruding on the thoughtless plans of the elite but it is by no means the only example.  When you institute incredibly stupid policies it is imperative that you control the narrative.  Western governments have spent huge amounts of time and money doing just so but their control over the media is not as complete as they think.  Main stream news media are now inconveniently discussing vaccine injures on live television.

This is a huge problem for government largely because there is so much to discuss.  Media organizations have so much material to work with they could make vaccine injuries a regular discussion topic on the evening news.  If they did this I might even watch Canadian news for the first time in decades.  I hope the first story will be on how school boards have acknowledged that gym class can be deadly for vaccinated children. 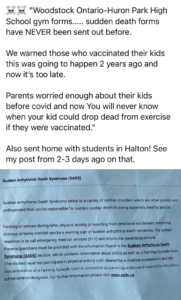 The left desperately wants to keep COVID but reality is spoiling their party.  Even the most woke least intelligent leader in the world is waking to reality.  The reality in this case is that Canadians like Pierre Poilievre a lot more than they like Justin Trudeau.  Trudeau does not mind killing people with vaccines he just does not like losing elections to people from Calgary.  Poilievre’s freedom message is resonating with far too many Canadians so Justin sent out his minions at the Toronto star to see if people will buy that Justin also likes freedom. 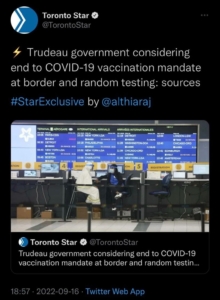 Of course Justin doesn’t like freedom any more than his father Fidel liked freedom but he will allow it if he must.  But don’t hold your breath waiting for this.  Justin won’t get around to allowing freedom until he finishes persecuting his political enemies.

No one on earth deserves to be slapped in the face by reality more than Justin Trudeau.  I am sure the last place on earth where the new normal collapses will be Canada but judging by how quickly it is unraveling elsewhere that day will come.  Justin’s Rendezvous with reality is inevitable.  I hope he gets what he deserves. 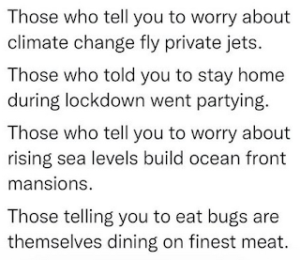