For a year now government and their media acolytes have been telling us that the vaccines are safe and our only option.  Anyone who has been paying attention to this farce knows that is not true.  These vaccines are not safe and there are many options including doing nothing.  Unfortunately most people are not paying attention.  Over Christmas I had a relative tell me that it was unthinkable the government would be promoting treatments that were not safe.  I have a couple of questions for all those deluded souls still trusting government.  If the vaccines are safe and effective why are none of them approved?  Why are all of the vaccines still covered under emergency use authorizations?

Seriously it has been a year and billions of people have been jabbed.  Some governments are now mandating the jabs, so why are the jabs not approved?  Does everyone on earth need to take them before they can be approved?  Doesn’t that seem backwards to you?

Before answering those questions we must also consider the governments’ curious obsession with jabbing children.  COVID poses no risk to children.  That has been clear from the very start of this farce.  The SARs COV 2 virus is oddly, highly, selective.  It kills only the very old and the very ill.  It was almost as if this virus was designed in a lab to cull those who no longer contribute economically, but I digress.  What is the logic in wasting medical resources on people who do not need treatment?  We could perform open heart surgery on each child.  Why aren’t we doing that?

We are told that children must be jabbed to protect adults.  Let’s set aside for a minute how incredibly unethical and evil that is for a moment, and ask how does this protect adults?  We are told that it protects others by reducing transmission but that is a lie.  The way the jabs work they cannot prevent infection or transmission the only thing they prevent is testing.  It appears that the Jabs reduce infection because the jabbed are only tested once they show symptoms.  Un-jabbed are routinely tested for the most ridiculous reasons.  We find thousands of asymptomatic un-jabbed but we don’t even look for asymptomatic jabbed people.  This is ironic because the only asymptomatic people capable of transmission are the jabbed.  Asymptomatic vaccinated people are super spreaders, which is why infections always surge after vaccination programs start.  Vaccinating children will just make this worse.

I think we can agree that jabbing Children makes even less sense that forcing vaccination on low risk adults, but what does that have to do with vaccine approvals?  Well I confess I did not connect these dots either, that is why this short interview with Robert Kennedy Jr. hit me like a bolt of lightning.

The manufacturers do not want their products to be approved yet.  Once the vaccines are approved the manufacturers can be sued unless the vaccine is recommended for children.  These vaccines are the deadliest vaccines in history.  Moderna and Pfizer would be bankrupted by lawsuits if the vaccines get approved before the FDA recommends them for children.  Remember the FDA has been playing along with this game.  They could have pulled the emergency approvals long before now so they are complicit in this disgusting and immoral scheme.  The pharma companies are willingly killing children in order to avoid being sued for killing adults.  Have you ever heard of anything more evil?

Thankfully we have people like Robert Kennedy Jr. to bring this truth to light.  Robert Kennedy is emerging as an unlikely hero.  Here he is in another interview dropping COVID truth Bombs.

Before COVID RFK Jr. was the Kennedy the media dismissed and ignored.  Here is how Wikipedia marginalizes him as a tin foil hatter.

Every other Kennedy is treated with reverence by the media. The media couldn’t even find a bad thing about Ted Kennedy.  Ted Kennedy was a selfish drunk who caused the death of Mary Jo Kopechne and the media still fawned over him.  RFK Jr. is worried about vaccine safety and he is a pariah.  Maybe if RFK Jr. would just kill someone while driving drunk the media would warm up to him.

We may have finally found the man capable of leading us out of this madness, even if the media hates him. 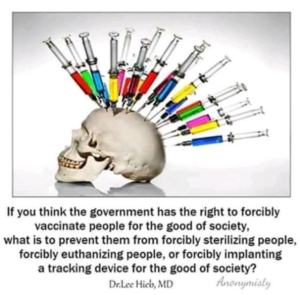