The Truth has a way of finding its way through the cracks.  In this case the truth should lead to multiple charges of mass murder.

Dr. Andrew Hill is a researcher who on Jan 6th 2021 gave testimony to the NIH about the effectiveness of Ivermectin.  His testimony was based on research he was about to publish.  This of course did not sit well with Anthony Fauci.  The COVID vaccines had only recently been granted emergency use authorization.  One of the conditions necessary for an emergency approval is that there are no alternate treatments.  A paper showing Ivermectin reduces deaths by 80% would have stopped the vaccine gravy train in its tracks.

This was a serious problem for Pfizer and Moderna but then a funny thing happened between Jan 6th and when the paper was finally published.  The conclusions changed completely.  Suddenly Ivermectin did not work.  All the data in the paper still said that it did work but the conclusions now were that we need more time to study it.

So what happened to change the conclusions?  Bill Gates happened.  The conclusions changed and Dr. Hill received a $40,000,000 research grant from Unitaid, an arm of the Gates foundation.  How do we know this?  Dr. Tess Lawrie, a colleague of Dr. Hill, taped a zoom call she made to him.  She tried with no avail to get Dr. Hill to be honest.  Millions of lives held in the balance but the only life that concerned Dr. Hill was his own.  Incredibly he admitted that the new conclusions were actually written by Unitaid.  This is from the transcripts.

Hill: Unitaid has a say in the conclusions of the paper. Yeah.

Tell me again that this is not a conspiracy.  These conclusions were bought and paid for.  Fauci and Gates knew that Ivermectin worked, they just needed time to hire other corrupt scientists to design an Ivermectin trial that would fail.  These greedy bastards killed millions of people by denying treatment and promoting toxic vaccines.  There is no way this could have happened if there was even one honest world leader.  How many more people need to die before someone is held accountable? 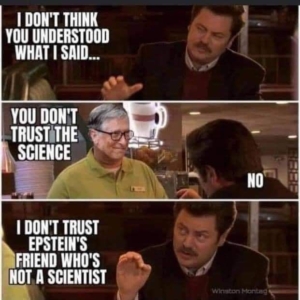