Yesterday Jason Kenney explained in great detail all the damage lockdowns cause right before he announced a new lockdown.  Don’t worry it is only for 3 weeks just like the one in March was only 2 weeks.  Jason has trouble telling time or using a calendar.  He is blissfully unaware that fall and winter is cold and flu season and he does not know how many days are in a week.  Since the restrictions from the first lockdown have not been completely lifted it is obvious that Jason thinks there are at least 126 days in a week.  That means the restrictions announced yesterday will not be lifted before December 7th 2021.  Coincidentally that is when Edmonton’s mask mandate also expires.

Jason also made masks mandatory in private offices.  Jason does not grasp the concept of property rights.  He likes masks because “there is more and more evidence that masks reduce the spread”.  That would be great if it was true but it is not.  The only evidence around masks show that they don’t work.  They don’t even work in a clinical setting if they are worn for more than 2 hours.  Do you think Jason even knows when he is lying?  I think he is taking his mask advice from this woman.

Once again Alberta is going to Quarantine healthy people.  It is hard to understand how quarantining health people stops sick people from spreading a virus.  Not surprisingly that is exactly what this study found 3 days ago.

This is one of their findings.

That is a lot of words to say that lockdowns are something only a politician can love.  It is the only thing more useless and destructive than they are personally.

Jason said that he did not like lockdowns but that we cannot ignore that Alberta has more active cases than any other province.  My answer to that is why not?  Alberta has more cases simply because we do more testing.  The plots below show total testing and positive tests as a percent of population for the 10 provinces 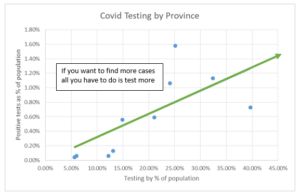 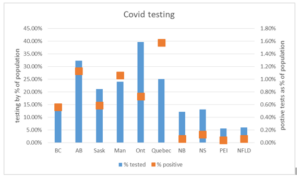 Ontario is the only province that has done more testing than Alberta.  Both plots show the same thing the more testing you do the more cases you find.  Ontario and Quebec are a bit anomalous Ontario has fewer cases than you would expect for the volume of testing and Quebec has more.  This is likely because there is no standard for number of cycles to the PCR test.  Quebec likely has a higher cut off than Ontario.  I cannot know that for sure because that information is not available.  In fact Alberta stopped publishing any testing information on the provincial website 2 weeks ago.  Curious that they want to deprive you of your income based on testing but they don’t want you to know how much testing they are doing.

In the press conference Jason discussed cases of people who died because of the first lockdown.  He then announced a second lockdown that he hoped would saves lives.  In the movie Sophie’s choice a sadistic Nazis guard forced a mother to choose one child to die in return for a guarantee the other could live.  Jason does not even need a guarantee; he is happy to kill some people in the mere hope of saving someone else.  The Nazis guard would have no fun with Jason he is either to evil to care or too stupid to understand. 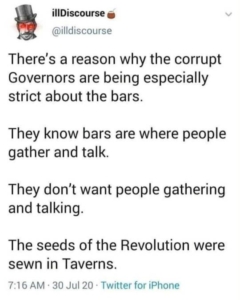 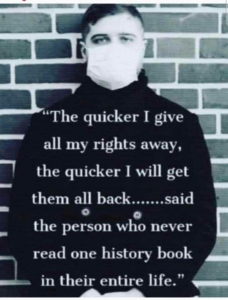