A few days ago I showed this plot from Sweden. 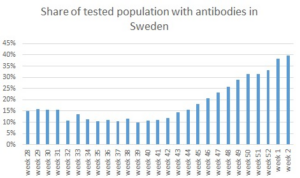 Sweden is naturally heading towards herd immunity.  This was their strategy all along and they were mocked for it.

Sweden was not the only country pursuing this strategy.  A friend sent me this article.

I had not been tracking India, so I decided to take a closer look today.  You can see from the plots below that cases peaked in September and deaths peaks shortly after that. 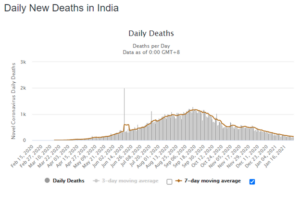 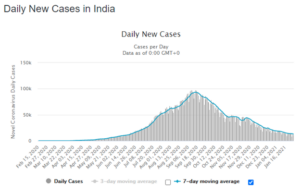 At the peak more than 1000 people per day were dying in India.  That seems like a lot but remember India is now the most populous country in the world.  1.4 billion people live in India so 1000 covid deaths per day would be the same as 37 deaths per day in Canada.  Canada’s worst day was almost 5 times higher than that.

On a per capita basis India has one of the lowest covid death rates in the world (111/million vs Canada 515/million).  How did India reach herd immunity without a lot of deaths?  There are a few potential explanations.

India’s population is growing so fast the average age is 29.  Covid disproportionately effects older people and India has very few old people.  Only 0.83% of the population is over 80.  The plot below is data only to Dec 8th, you can see there is a correlation with age, but the correlation is not strong. 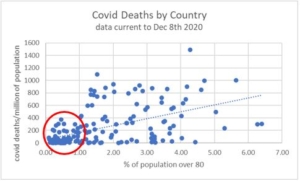 India is at the low end of the plot with less than 1% over 80.  Some countries in that group had up to 400 deaths per million so India did well even when compared to other young countries.  Age can not be the only reason.

India’s malaria problem is so large the government hands out malaria drugs for free.  Hydroxychloroquine is a malaria drug.  Malaria is caused by a parasite.  Anti-parasite drugs like Hydroxychloroquine and Ivermectin have proven to also be strong anti-viral drugs.  In stark contrast to the western world, no one in India was stupid enough to ban these drugs.

In Canada and many other western nations every death is a covid death.  The death totals must be kept high or people will figure out none of this was necessary.  Some western nations are showing tens of thousands of covid deaths, yet they have little to no excess death.  India did not have this political problem because they did not have a lockdown to justify.  India like the rest of the world panicked last March and instituted a lockdown.  After a few weeks India realized that lockdowns were a kneejerk reaction not a long-term solution.  The following news article is from May 4th.

This is my favorite quote from the article. But despite the grim statistics, the country allowed most businesses and services to reopen Monday, entering a third phase in the national lockdown strategy as Indians were warned it was time to learn to “live with the virus.”   Apparently the third phase of the lockdown strategy was to not have a lockdown.

Back in May India knew that, despite the cost, they would have to learn to live with the virus.  The Indian government was mature enough to acknowledge that the virus would not go away, and you cannot hide from it.  India lifted their lockdown and just got on with life.  Think of the misery that could have been avoided if Canada had even a single politician with that level of maturity.

India may have been forced to face reality just because they are not wealthy.  The sad fact is that prolonged lockdowns are something only wealthy nations can do.  Wealth brings with it the luxury of stupidity.  The stupidity made possible by wealth will eventually destroy that wealth.  That is where we are today in the western world.  Irredeemable stupid and rapidly losing the ability to afford it.

Subscribeto RSS Feed
If We are Going to Close the Border, Can’t We Wait Until Trudeau is Out...We Have All the Power, It is Time to Use it.
Scroll to top