Austria was the first country in the world to lock down unvaccinated people.  That policy lasted only 4 days.  The entire country is locked down now.  Locking down unvaccinated, as with everything governments have done, was destined to fail.

Austria already had a vaccine passport system.  Unvaccinated people could not access most venues without proof of a recent negative test.  Vaccinated people only had to show their vaccine passport to gain entry.  The implications of this are obvious but since COVIDiots struggle with the obvious I will break it down.  The only people in these venues that could prove they were not infected were the unvaccinated therefore they were not the source of the outbreak. 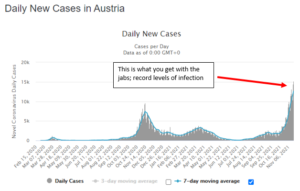 65% of Austrians have been jabbed and they are blaming the un-jabbed for the record levels of infection.  How stupid do you need to be to believe that?  It is simple cause and effect.  After Jabbing 2 out of every 3 people, or more than 3 out of every 4 adults, your problems are now larger.

The solution of course is to jab everyone.  By February 1 all Austrians must be part of the experiment.  It is shocking that this is happening in Austria.  The Nuremberg code was developed and accepted worldwide because 80 years ago an Austrian forced people to take part in medical experiments.  I guess that code is not a “thing” any more.  How the hell did humans become the dominant species when so many of us stubbornly refuse to learn from our mistakes? 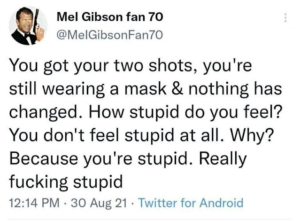 Subscribeto RSS Feed
It is time to let People Like Byram Bridle drive the BusDr. Chetty on the Spike Protien
Scroll to top