In the past week we have seen 2 very eloquent speeches by politicians calling out their governments over COVID Tyranny.

First I have a 2 part video from Australia, home of kangaroos and some of the biggest COVID tyrants on earth.  Thankfully Australians have Senator Malcolm Roberts to speak for them.

In the US they have Senator Rand Paul

We are at a moment of truth and a crossroads. Will we allow these people to use fear and propaganda to do further harm to our society, economy, and children?

Or will we stand together and say, absolutely not. Not this time. I choose freedom. pic.twitter.com/XrI2tjdAHW

Maybe that is why Dr. Hodkinson believes the dominos are beginning to fall.

Dr Roger Hodkinson. I think the dominoes are starting to fall pic.twitter.com/KJ0klYljrb

I would love to believe that this madness is about to end but I can’t.  We have seen light pour through cracks before only to see the crack quickly plugged by politicians and media.  If the dominos do fall, I fear they will fall everywhere but Canada.  Did you notice that I did not include an eloquent repudiation of COVID Tyranny from a Canadian politician?  That is because there aren’t any.

In Alberta we had 2 MLAs (Members of the Legislative Assembly) who stood up and spoke out.  They are now nowhere to be seen.  They were quickly and effectively silenced by Jason Kenney and the Canadian Media.  The success of these Tyrants and their evil media minions has been stunning.  The mass Psychosis in Canada is so deeply rooted, I doubt we can recover.

A few days ago I implored sane people to be loud.  I took my own advice and spoke to a shop keeper who told me the government had no choice.  Government had to strip our rights to protect us from ourselves.  To his credit he was willing to listen he was just not willing to think.  I showed him data demonstrating the lockdowns led to more deaths not fewer.  He thought that meant the countries with fewer restrictions had somehow done a better job of applying their restrictions.  The higher deaths in countries with more restrictions were due to people refusing to follow the restrictions.

That was the overall theme of his argument.  People will always choose to do the wrong thing.  The only solution is for government to force people to do the “right” thing.  When he asked me what I would do I replied I would let people make their own decisions and get on with life.  That was of course diametrically opposed to his world view.

At that point the conversation devolved in to a replay of a night news broadcast.  He told me about how terrible things were in Alberta and Florida where people were allowed to make their own decisions.  Albertans have only been allowed to make their own decisions for one week in the last 18 months.  In that one glorious week COVID in Alberta is doing the exact same thing it is doing everywhere in Canada.  It is infecting vaccinated people.  Likewise Florida does not have any more viral problems than any other state.  But facts don’t matter to this poor man.  Only fear matters. 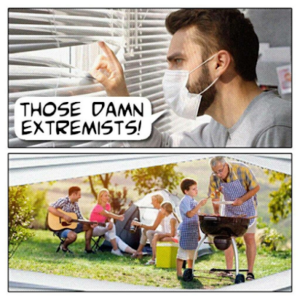