Some European countries like Austria have already mandated vaccinations and locked down unvaccinated people.  The European Union is now openly calling for mandatory vaccinations.

This is of course due to the Omicron spreading quickly through Europe.  The fact that Omicron is nothing more than a common cold makes no difference.  The March towards mandatory vaccinations and digital IDs in Europe will not be deterred by facts.

There is one curious outlier in Europe right now.  Despite being a hardline COVIDiot (and general all around idiot) Boris Johnson has been dragging his feet when it comes to mandatory vaccination and house arrest for unvaccinated.  The UK has a higher infection rate than the European average (see below) but Boris has good reason to drag his feet.  Vaccine mandates are illegal under British common law and the people of Britain are roundly against them. 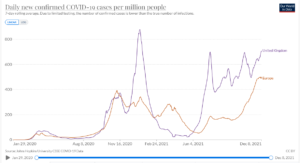 Good Morning Britain (GMB) is a morning propaganda program broadcast on ITV in the UK.  Recently they tried to advance the vaccine narrative by conducting a viewer poll on vaccine mandates.  Like most left wing lunatics the people in charge of GMB live in an echo chamber.  Because they support vaccine mandates they believe everyone supports vaccine mandates.  The poll was supposed to be a slam dunk.  Their viewers would demand vaccine mandates and in turn GMB would use their soap box to demand governments implement vaccine mandates.  It was a perfect plan until they used it.

When the poll started the public response was overwhelming against vaccine mandates.  So much so that GMB abruptly stopped polling.

GMB drastically underestimated the number of rational people in Britain.  Apparently no one at GMB has ever read any history.  Britain is the birth place of freedom.  They were the first people to wrestle control away from a king without executing him.  It took centuries and bloodshed to shake off feudalism and it seems 89% of Britons have no desire to go back.

COVID response plans are nothing more than an attempt to take the world back in to feudalism, so Boris is in a difficult spot.  He is faced with far more opposition in the UK than his European counterparts have in their respective countries.  The COVID narrative dissolves if everyone does not move in lockstep.  That makes Boris’s problem Europe’s problem and it looks like they have found a solution.  They are setting the stage to get rid of Boris.

Gee I wonder why the police suddenly decided to take drug sniffing dogs through the parliament buildings.  I also wonder why the media chose to print only 2 names; Boris Johnson and Home Secretary Priti Patel.  Hundreds of politicians and bureaucrats work in these building but the media decided to implicate only 2.  Curious isn’t it?

Then this morning I found this.

Boris and his wife are party animals; everyone knows this and the media has known about these parties for a very long time.  Why are they reporting them now?  The answer is obvious.  The knives are out for Boris.  The people behind this fake emergency are warning Boris.  Get with the program or be replaced.

Before COVID I would have told you that westerns leaders were chosen by the people in elections.  I clung to that notion even when the choices were mystifying.  I mean who in their right mind would want air heads like Boris Johnson or Justin Trudeau in charge of anything?  Now I am not so sure.  This whole farce has been orchestrated.  Borders don’t seem to matter.  Each country said and did the same thing at the same time.  It seems that each “leader” gets handed a script every morning.  Wouldn’t you like to know who is writing the script and holding the knife in Boris’s back?

How far away are we from this reality pic.twitter.com/ypN5jrzKjJ 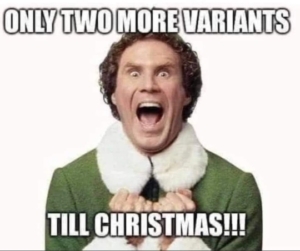 Subscribeto RSS Feed
Vitamin D, the only COVID Vaccine Without Side Effects.It is hard to Plan a Fake Pandemic without Leaving a Paper Trail
Scroll to top