In my previous post I showed how the vaccines are not preventing COVID deaths and Governments are using math tricks to cover that up.  The vaccines have failed.  That news alone is very bad, unfortunately it is not the end of the story.  The Vaccines are not just ineffective, they are deadly.  Here is new data from the UK showing All-cause mortality for vaccinated people is twice as high as unvaccinated. 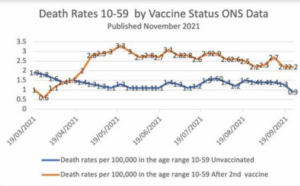 A difference of only 1 death/100,000 for a country as large as Britain is 30,000 excess deaths per year, but this data does not tell the whole story.  In the UK if you have had only one dose you are considered unvaccinated.  We saw in the Irish data even one dose causes problems so if one dose was considered vaccinated the separation between these two lines would be larger.

I found this plot in an article by the UK telegraph that shows the same thing a different way. 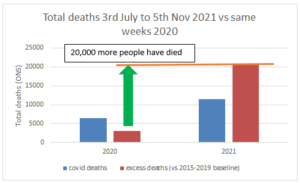 This comparison of the same period last year to this year is very disturbing.  Last Year no one was vaccinated in the UK.  This year almost everyone is vaccinated.  Twice as many people have died of COVID this year.  Last year the UK only had about 3,000 excess deaths.  A total far lower than the official COVID deaths.  The UK government was exaggerating the COVID number to scare people in to getting jabbed.  Now that everyone is jabbed not only are COVID deaths higher, all deaths are higher.  In a 4 month period nearly 20,000 more people died this year than last year.

These numbers are getting too hard to ignore even for the diehard COVIDiots.  Newspapers in the UK are now trying to craft a new narrative to cover this up.  In this article they are trying to claim that all the cancer patients in the hospital are only there because they did not get their third shot in time.

The logic is that all the deaths caused by the first 2 shots would have been prevented if we had only given more of the same thing.  That is the problem with lies.  They compound and contradict.  The old narrative was one dose was good, 2 was almost 100% effective.  The new narrative is that 2 doses is not nearly enough and that it is dangerous to stop at 2.

If you had written a novel 5 years ago where Government was killing people by injecting them with a toxin you might get it published.  That kind of evil from government is easy to believe.  If the characters in your novel were not fighting back but standing in line eagerly anticipating their next poisonous dose, you would not get it published.  The publisher would have looked you in the eye and told you there is no way people could be that stupid.  That manuscript would be pure gold now. 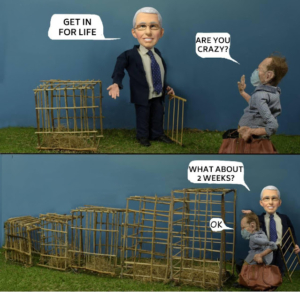 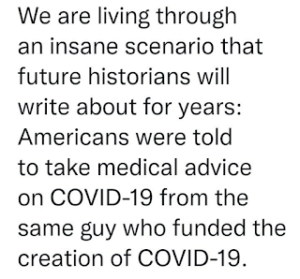