Governor Ron DeSantis chose not to follow the herd.  Instead of following scientists he actually followed science, tempered with a good dose of common sense.  I like to think it was because he was reading this blog but that is unlikely.  You don’t need to read this blog to not be a moron.  It really was not hard to get to the right answer on COVID.  All you had to do was stop listening to the fake experts in the media and government bureaucracy.

DeSantis was vilified for going counter narrative but time has vindicated him.  He was 100% right and the “experts” were 100% wrong, something he takes great delight in remind people.

At the end of the day Ron DeSantis, is still a politician and careful about what he says.  He is being very charitable with his description of the experts by saying that they were wrong.  No one can be possibly be as stupid as these “experts”.  They were not wrong they were lying and that is a big difference. 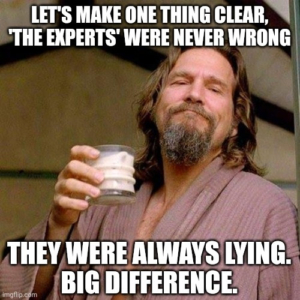 For almost 2 years the media worked overtime to convince us that DeSantis was the one who was lying but this week that changed in a big way.  CDC director Rochelle Walensky of the CDC just admitted the CDC was lying for more than a year.  The CDC assured American they were monitoring vaccine adverse events and they were not.  Every time Walensky stated the vaccines were safe she was lying.  If she thought the jabs were safe she would not have deliberately avoided gathering data on adverse events. 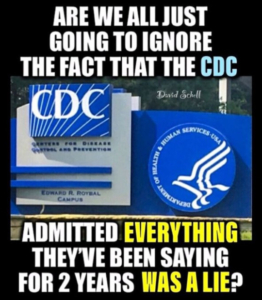 It looks like Rochelle Walensky has chosen the lesser of 2 evils.  She would rather we believe she lied about tracking vaccine injuries than admit she knew the vaccines were unsafe.  Director Walensky is not the only person this week hoping to convince us that 2.5 years of Tyranny was just a series of unfortunate errors born out of ignorance.  The Globe and Mail in Canada, where the truth is a criminal offense, allowed 4 doctors to admit mistakes were made.  But of course the mistakes were made with the best intentions.

In summary, errors were made in the “pandemic fog of war.” There is now a chance to correct them and to change our course for the better.

Even a sliver of truth emerging from Trudeau’s empire of lies is shocking but not nearly as shocking as this.  The wicked witch of the south, Jacinda Ardern, now thinks we should respect other’s decisions.

After discriminating and terrorizing her nation for not doing what she wanted them to do, the Prime Minster of New Zealand FINALLY drops all "health" mandates

This is the point where everyone should be asking themselves, what was the point of all of this!? pic.twitter.com/dVhtnqc3jx

Of course she is not talking about your decision to be unvaccinated.  She wants you to respect her decision to violate the rights of her citizens.  Nothing to see here now folks, COVID is over let’s keep moving and put this all behind us.  The events of this week would have been unfathomable even 1 month ago.  Politicians and bureaucrats admitting to lies and mistakes, what is going on?

You cannot hide the truth forever.  Eventually it finds the light but still I did not expect the dam to break so quickly.  Politicians and bureaucrats are working feverously to craft a new narrative because they know some damning data is about to be released.  If I had to guess I would say that data concerns the vaccines and is probably why Denmark has banned boosters for people under 50.

The data must be very bad for the boosters to be banned.  It would be much easier just to say that they will not be mandated.  The problem with that, though, is that many frightened people would still take them.  The Danish government is so concerned people will want boosters that they banned them. That tells you everything you need to know about the vaccines and what is going on currently. 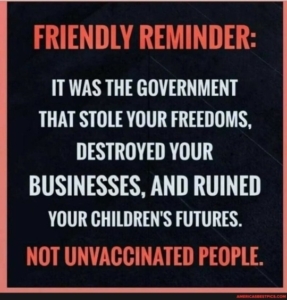