In March of 2020 politicians flipped a switch and turned the economy off.  We were told that it was necessary to keep the whole world from dying of COVID.  They simply had no choice but to “follow the science”.  The science never said that economic destruction was an effective antiviral.  Anyone who understood even basic science knew that science had nothing to do with what was happening.

The problem with our modern society is that almost no one understands science.  It is ironic that the application of good science is what makes this modern world possible but you need zero science knowledge to exist comfortably within it.  That is why it so easy for the government to lie.  Government can always find a person with the title of Doctor to appear on TV and say whatever government wants.  99% of the population would take everything the “expert” said at face value.  If Dr. Anthony Fauci went on TV and told people coronavirus in sewage means that butt plugs are the best way to prevent transmission, 99% of the population would not leave the house without one firmly in place.

For 2 years the government “followed the science” which remarkably made them more powerful and their friends more wealthy.  The fly in the ointment was the 1% of the population that understood science.  These people simply would not shut up.  Worse yet they spent their own money to force disclosure of documents the government would rather conceal.  Every new release of Pfizer documents shows how incredibly fraudulent and unscientific the vaccine trials were.  The latest release shows that one study group was completely fictitious and 96% of pregnancies failed. 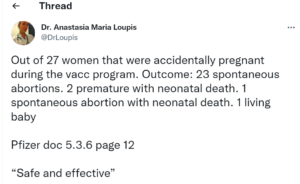 Even non science types understand that fake people and dead babies are not good science.  In fact the only good science the government used was psychology.  Something people are also finally realizing.

“When do you call out for Mummy and Daddy? When your frightened, when the demons come”

Governments have a serious problem.  They can’t ride the “following the science” horse any longer.  Too many people realize they are lying.  I had hoped that when we got to this point the government would have no choice but to quit.  Boy was I naïve again.  All that happened is that the government simply stopped trying to hide.  The FDA has announced that the children’s vaccines will not need to clear the 50% efficacy threshold.

The threshold now is that the vaccines will be approved as long as the efficacy in children is similar efficacy in adults.  The efficacy in adults is negative so in effect the FDA just announced that the data does not matter.  The vaccine for children will be approved come hell or high water.  The government was hiding behind science, now they are simply hiding behind authority.  Even the people still wearing butt plugs are bound to notice that. 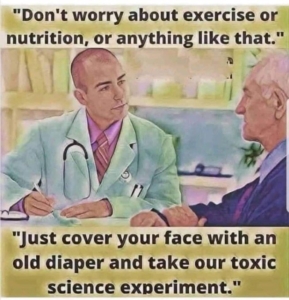 Subscribeto RSS Feed
Another expert who won’t take the vaccine, even the best oneCanadian Media Proving the World Does not need more Canada
Scroll to top