The media is going to ridiculous extents to try and discredit the Freedom convoy.  Now they are trying to say that Putin is behind the protest.

The CBC suggests "Russian actors" are behind the #TruckersForFreedom convoy. Seriously. #cdnpoli pic.twitter.com/a6sQyWtKkx

This woman does not know how ridiculous she sounds.  The name of the protest is the FREEDOM Convoy.  The only thing the protesters want is for the government to respect our constitution and return rights that were stolen.  According to the “journalist” Vladimir Putin is now financing and supporting freedom, rule of law, and human rights.  If I believe this “journalist” then the only politician in the world who supports democracy is Vladimir Putin.

While the media is desperately trying to demonize people who want their rights respected “conservative” Politicians are pretending to have been against the COVID restrictions all along.  Here is Leslyn Lewis.

Leslyn Lewis made a bid for the leadership of the conservative party.  She ultimately lost to Erin O’Toole who has turned out to be entirely useless as a leader.  I did not agree with everything Leslyn Lewis said but she was the only one in that race that I could have supported if I was a party member.  In that quick interview she almost gets it right but still hints the mandates are ok if they serve public health.  Even she does not get it.  Our government should never be able to suspend our rights and the right to bodily autonomy is the most fundamental of all rights.

If these “conservative” politicians really want to show support for this protest and human rights there is something simple yet powerful that they can do.  Not all of the trucks in the convoy have made it in to the center of the capital.  The Ontario Provincial police have illegally prevented thousands of trucks from entering the Capital.  These fake “conservative” politicians who want to attach themselves to this protest could start raising hell.  They should be on every media platform calling our Doug Ford and demanding the Truckers be allowed access to the parliament buildings.

The Parliament buildings are paid for from taxes taken from these truckers.  The People do not work for parliament, Parliament works for the people.  Unfortunately there does not seem to be a single politician in this country that understands that. 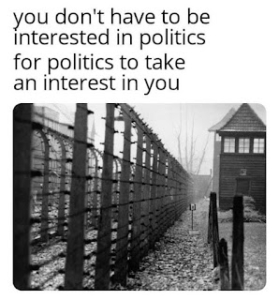