The Japanese diet is high in vitamin D.  As a result very few Japanese are vitamin D deficient.  In previous Posts I presented data showing nations with high overall vitamin D levels like Japan and Norway had very few problems with COVID.  Infections and deaths were very low.  The plot below shows how Japan compared to other countries on Dec 31st, 2020. 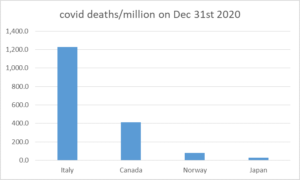 Despite their obvious lack of a problem Japan decided to vaccinate anyway.  I will give you 3 guesses about what happened next. 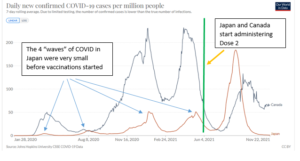 The Post Vaccination wave in Japan was 4 times higher than any previous wave.  57% of all covid infections have occurred in the last 5 months, since the start of dose 2.

Every country in the world saw a post vaccine surge in infection.  The plot above shows Canada having the same surge.  The surge in Canada was significant but smaller than the previous “waves”.  I can think of 3 reasons why the post Vaccine wave was smaller in Canada. 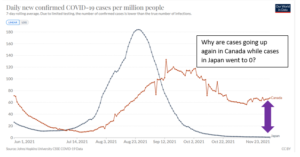 Canadians should be asking the simple question, “What did Japan do that was different than what we did”?  The two strategies were very different and produced dramatically different results.  This is the Canadian strategy.

The Japanese strategy was simple common sense.  The Japanese took a step back to assess the situation.  I am sure somewhere in Japan the conversation went something like this.

Smart Japanese citizen #1 (SJC1) – “Before vaccinations we did not have much COVID.  Now after Vaccinating we have much more COVID”.

Smart Japanese citizen #2 (SJC2) – “The Vaccines have obviously made the situation worse”.

SJC1 – “Fauci is recommending boosters.  Trudeau has already bought 2 years’ worth of boosters for Canada.  That seems pretty stupid to me”.

SJC2 – “Yes only an idiot would do more of what did not work last time.  We need to stop vaccinating and try something different”.

SJC1 – “Several countries are having success with Ivermectin.  Why don’t we try that”?

SJC1 – “Almost nothing compared to what we have already spent on Vaccines”.

SJC2 – “Ok let’s do that.  How soon can we start distributing Ivermectin”?

SJC1 – “We can be up and running by September”. 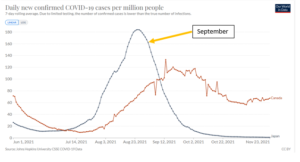 The Japanese made the simple decision to stop doing something that was not working.  Canadians instead decided to double down on Stupid.  That is not surprising from a country that has already tripled down on Stupid in Federal elections. 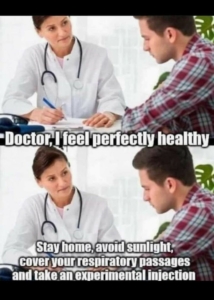 Subscribeto RSS Feed
This Winter Canadians will have to Choose, Freedom or LockdownsHow can you argue the COVID Jabs are not a Bioweapon?
Scroll to top