People are willfully blind when it comes to COVID.  For nearly 2 years millions have been willing to believe that COVID is akin to the black plague despite a total lack of supporting evidence.  Any way you slice the data COVID is nothing other than a bad flu.  But data be damned, it is a plague if the news says it is a plague.  As long as you do not avert your eyes from the TV screen this is easy to believe.

Now people are willfully blind to the evidence that the vaccines are dangerous.  A week ago I discussed the “mysterious” increase in medical emergencies in Alberta, traffic accidents in the US, and deaths in Europe.  Now we have this from the US,

Something Really Strange Is Happening At Hospitals All Over America

And this from Australia.

And they don't know why.

(The state has recorded 1,112 Covid cases in total since the beginning of the pandemic). pic.twitter.com/3daGpzQJRs

A higher than normal volume of medical emergencies in one province could be just a statistical blip.  Abnormally high medical emergencies simultaneously in separate countries is a pattern.  Medical authorities should be concerned about this but they are not.  Their only concern is when they can give you your 4th COVID Jab.

It is not surprising that the average person is unconcerned about these strange emergencies because the average person does not see it.  Out of sight out of mind.  As long as the media does not dwell on it no one will be concerned.  What is surprising is how easily we accept things that are right in our face.  Things like professional athletes collapsing in front of thousands in the stadium and millions watching on TV.  Here is an article out of Germany documenting 75 athletes who have collapsed since June.

The authors of this article actually did some good science.  Certainly better science than Deena Hinshaw or Anthony Fauci have ever done.  The authors tried to determine if 75 high profile athletes collapsing in 5 months was outside the norm.  They could find no similar period that had numbers anywhere near this high.  That is not that surprising; it is not normal for fit healthy people to suddenly collapse.

35 years ago I competed in gymnastics.  My team mates were all 20 somethings in peak physical condition.  We were young, strong, and cocky.  We thought we were invincible.  Statistically speaking we almost were.  Our youth and elevated fitness made us unlikely to die of anything.  If one of us died in training it would have been shocking.  There would have been an immediate investigation.

That was then this is now.  In a post jab world athletes collapsing is common.  So common that the new normal is to carry them off the field and resume playing.  I am surprised there are not already rules setting how much time you can take to remove a body from the field.  By next year if your remove and then revive a fallen player you will be penalized for delay of game.

What the f$%k is wrong with people?  There is nothing normal about athletes collapsing in front of a live audience.  Something is horribly wrong and we are just ignoring it.  I am not sure Humanity can be saved from their own stupidity.  I am not sure it is even worth trying. 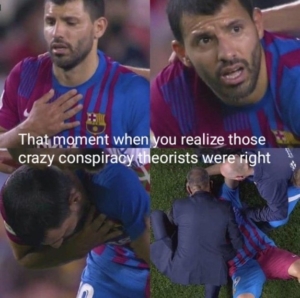 Subscribeto RSS Feed
I have Seen Enough Parents’ Tears, It is time to Punish Those Jabbing...Be Careful to Blame the Right Unvaccinated People.
Scroll to top