In this short Video an Oxford professor explains the inversion of the precautionary principle.  We employed lockdowns we knew were enormously harmful to stop a virus that might be harmful.

"We inverted precautionary principle of trying to minimize harm by doing the one thing that we knew would cause harm: lockdowns.. What we do see very sadly.. harms unfolded.. We sit watching devastation that we knew these measures would cause 2yrs ago”
—Oxford Prof @SunetraGupta pic.twitter.com/4fYamssyKr

Anyone with an ounce of common sense knew that we should not have used lockdowns but almost every government did.  We were told that it was out of an abundance of caution yet they employed no such caution when it came to the damage from Lockdowns.  Acting on the abundance of caution or using the cautionary principle is the dominant theme in our modern world.  Too bad the precautionary principle is just another destructive invention of the left.

COVID is not the first time the precautionary principle has been invoked to steal your rights and wealth.  It has been justification for climate regulations for decades now.  People have been conditioned to accept that the “science is settled” and that you must endure hardship now to avoid a theoretical future calamity.  This is just another lie propped up with the fabricated precautionary principle.

Newton developed a set of equations from his theory, using Einstein’s explanation results in the same equations.  These equations have been proven and engineers have been using them for hundreds of years.  That is the point, science may never be settled but once it is repeatable we call in engineering and we use it.  If the science of global warming was indeed settled it would be repeatable.  There would be a set of equations that would give the same answer every time and engineers would be using them to hold atmospheric CO2 concentrations at the optimum level.  Do you see a lot of climate engineers doing that right now?

A plot of model predictions vs actual temperatures clearly demonstrates that climate science is neither settled nor repeatable. 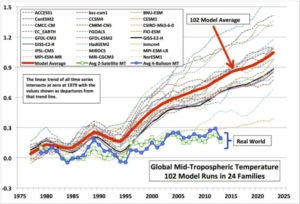 The various lines are from the various climate models.  If the science was really settled all the models would produce the same predictions and it would closely match the observed temperature.  They aren’t even close to each other yet alone close to reality.  The solution is to average all of the models and present that as the “settled science” even though the average (red line) has no bearing on reality.  Averaging 100 numbers spit out of 100 different random number generators does not somehow magically produce the correct answer.

Climate science is obviously not settled yet the precautionary principle is invoked to justify transferring your wealth to politically connected business that produce windmills and solar panels.  Our easy acceptance of junk climate science and the wholly manufactured precautionary principle paved the road to lockdowns.  Once again we allowed the government to damage our lives now to remove the threat of some future event that real science tells us is unlikely to ever happen.

The public accepts these absurdities because they are trusting and ignorant.  Trust seems to be intrinsic to humans.  Ignorance on the other hand is cultivated by the government and media.  The combination of trust and ignorance makes humans easily led sheep.  Our motivation to accept carbon taxes and lockdowns is our desire to be part of the herd, but what is the government’s motivation for imposing these destructive policies?  Well that is simple, our governments hate us.

I have stated many times we are at war with our own governments, most people are just unaware that it is happening.  They still think they are saving others and the planet.  If people ever woke up and considered the data the conclusion is inescapable.  Western governments are actively destroying western society.  Thankfully others are finally waking up to that reality.

'The State is no longer working to protect our shared heritage, institutions, culture and way of life. We are watching their deliberate destruction and dismantling ready for replacement with something else.'

Neil Oliver gives his views on why we 'shouldn't trust the State.' pic.twitter.com/MmGCMe98RP