A friend sent me this article 2 days ago.   The article takes data from New Zealand’s latest COVID surveillance report.  New Zealand employed aggressive lockdowns, restrictions, masks, and vaccination.  Overall their vaccination rate is slightly lower than Canada but their % of boosters is slightly higher.  So what did New Zealand get for denying citizen’s their rights and enriching pharmaceutical companies? 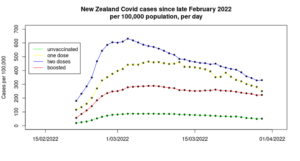 And far more likely to be hospitalized. 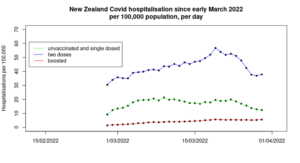 There still appears to be some benefit from boosters with respect to deaths which is odd that you can become sicker yet not die.  The “death benefit” so to speak is only with people over 70.  It is possible that this is real or it is also possible that the seniors dying without a booster may have been too sick to get a booster.  It would be senseless to give a booster to a senior on their death bed.

At best this data indicates that vaccines and boosters should have been targeted for high risk seniors only.  At worst it says the vaccines and boosters only made things worse.  If I was a betting man I would put my money on the latter since New Zealand also has a high number of excess deaths that cannot be associated with COVID.

JP is hopeful that the obedient will eventually become critical thinkers.  I hold no such hope.  The obedient far outnumber the critical thinkers and most of the obedient simply are not capable of critical thought.  I have a friend who puts it this way.  Modern society is an inverted pyramid.  At the bottom of the pyramid is a small group of people who develop, implement, and maintain new technologies.  Everyone above that benefit from this but do not contribute to it in any meaningful way.  If the bottom group of critical thinkers performing all the value add work were to disappear society would come crashing down.  We would be back in the Stone Age within a few generations.

We are victims of our own success.  Technology has made it possible for large numbers of people to survive without contributing.  That was OK until those people started driving the bus.