None of this would have happened if we had just said no in March 2020.  When the government told us there was a new virus and we must protect the hospitals we just should have said no.  We should have demanded that the government explain why we spend billions every year on a health care system that we cannot use when we need it.  Had we done that we could have gotten to the root of the problem much sooner. 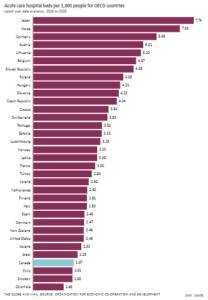 Despite the fact that Canada spend as much or more than every other country on this list we are at the bottom for system capacity.  Where the hell did all the money go?  The sad fact is that our governments destroyed lives and the economy to cover up their gross mismanagement of health care, and we let them do it.

The root of the problem is government incompetence.  This is a problem that will never be solved because government will always be incompetent.  People do not go in to government because they are having too much success managing large complex organizations.  Those people are all I n the private sector making too much money to be bothered with a career in politics.  We are not governed by the best and brightest.  We are governed by sociopaths with no marketable job skills.  Our problem was never a virus, it is that government manages hospitals, a task they are completely unqualified to for.

The solution to government incompetence is not more government yet that was the solution proposed in March of 2020.  Government mismanagement of health care would be overcome by surrendering our rights and giving more power to government.  Only an idiot could agree with this yet most Canadians did agree.  We handed unprecedented power to some of the most disgusting people our country has ever produced and look where that got us.  Doug Ford is moving to make his new power permanent and Jason Kenney is arresting more street preachers.

Another pastor in Alberta has been arrested. An injunction, ordered to restrict anti mandate protests, is now being used to justify the arrest of street preachers.

Covids done, but government over reach is just getting worse.pic.twitter.com/ObqCgmEtPI

It has been 2 years and some of us still have not learned our lesson.  This idiot thinks the solution to government mismanagement of health care is to centralize and give government even more control over health care.

Just as the solution to a bad vaccine is not to use more of it, the solution to bad government is not to have more of it.  The world needs far fewer COVID Jabs and far less government but that is unlikely to happen because of our cowardice in March of 2020.  The world is now facing food shortages and we have no one to blame but ourselves.  Anyone who wore a mask, used a vaccine passport, watched friend’s businesses be destroyed and said nothing is to blame for all of this.  You caused it, it is time you shoulder the shame for it.