In the late 1600s Bacteria were discovered; it wasn’t until the late 1800s that Louis Pasteur was able to link bacteria to disease.  In 1861 Pasteur published his germ theory.  Germ theory postulates that disease is caused by germs, bacteria and another germ which at the time no one had been able to identify.  Later that century the other germ was identified when viruses were discovered.  Necessity is the mother of invention.  Pasteur’s pioneering work on bacteria stems from a burning need to figure out what was making beer go sour.  That alone is enough to rank Pasteur among the greatest of all time.

At the same time Pasteur was publishing germ theory there was another competing theory called Terrain theory.  Terrain Theory postulated that diseases were caused by an imbalance in the body; if the body (the Terrain) was healthy and in balance you would not get sick.  Germs were just another nuisance that a healthy body dealt with every day.  Today you find most Naturopaths espouse ideas that are basically Terrain theory, but they are the only ones, the rest of the world went hard for germ theory.

Today modern medicine and society is obsessed with finding and eradicating germs everywhere.  Walk down a cleaning aisle in a store and count how many products promise to kill 99.9% of viruses and bacteria.  Virus busting vaccines became a staple of medical care.  Just look at us now, hiding behind masks in our basements until a vaccine from covid can be developed.  In Modern times most people give no thought to a healthy Terrain, if they did we would not see obesity, Type 2 diabetes, and smoking related cancers.  We rely completely on modern medicine to save us from ourselves.

Because I am a bit of an odd duck, I found myself thinking about what would have happened if germ theory and Terrain theory were being debated at the same time that we discovered the Covid 19 virus?  I think you would have an awfully hard time making a case for germ theory.  90% of the people who test positive for Covid have no symptoms, they are not sick, they do not have the disease associated with the Covid 19 virus.  How could you argue that the virus causes the disease when 9 out of 10 people with the virus do not have the disease?  Pasteur would have been heckled off the debate stage.  He would have had to retreat to the brewery.

Does this mean I don’t believe that germs cause disease?  No of course not; Vaccines have had dramatic effects on some diseases like polio.  Vaccines have undoubtable helped but it should be noted that deaths from infectious diseases were dropping dramatically before the invention of most vaccines.  Improved nutrition from increased food availability and improved sanitation from sewage and garbage control had a more dramatic effect than the development of vaccines and medicines.  Farmers, Plumbers, and Garbage men have saved more lives than Doctors.  As a plumber’s son I note that with pride.  Improving the Terrain dramatically improved overall health.

Modern society is too fixated on germs and does not spend enough time thinking about Terrain.  That fixation on germs is the root of some of the most destructive Covid regulations.  People do sports and go to the gym to improve their overall fitness and health; why the hell would you shut down sports and fitness centers in response to a viral outbreak?  Declining personal health will just make the Terrain weaker and more susceptible to the virus.  Shutting people in their homes restricting access to sunlight and fresh air makes the Terrain weaker.  We have seen this in the data, lockdowns did not flatten the curve they sharpened it by weakening the terrain.

This video is from Australia.  I don’t know who this guy is but he is explaining the new covid restrictions.

Set aside for a minute how scary it is that the government wants to control who you see and how often you see them.  Even worse they want you to keep a log of who you speak to so they can check it any time they want.  This is 3 steps beyond anything the soviets tried to do to their citizens.  Instead let’s take a look at Australia with respect to Covid rather than discuss their total loss of fundamental human rights.  Here is what has happened in Australia 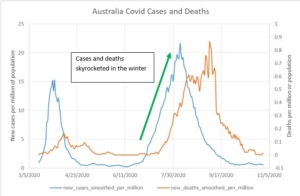 Australia is in the southern hemisphere so when Covid first hit they were still in the summer.  They employed drastic lockdown measures and had very few cases and deaths.  Australians congratulated themselves on what a great job they did controlling the virus when really it had more to do with summer than it had to do with yellow warning tape and police brutality.  In the summer all the ultraviolet light makes it difficult to transmit the virus and the Terrain is strong.  Warm weather and vitamin D are very good for immune systems.  As soon as winter hit Australia discovered that they had not chased the virus off the continent.  Australia went back in to a harsh lockdown.

Cases have fallen again which probably has more to do with the arrival of spring than it does to the lockdown.  The video was from October 26th; now that cases are down the government has decided to ramp up the restrictions.  The Australians are making the same mistake every northern hemisphere country except Sweden made.  All summer long people were discouraged from moving around and congregating.  Instead of using the summer as an opportune time to let the virus circulate when the Terrain was strong we did the opposite.  Now winter is imminent and covid deaths are rising everywhere in the northern hemisphere except Sweden.  How stupid can we be?

It should be obvious that the truth is somewhere in between germ theory and Terrain theory.  Contacting a virus does not guarantee that you will develop a disease.  The stronger the Terrain, the less likely a disease develops.  We cannot keep an airborne virus from circulating; you would have to be as unintelligent as Justin Trudeau or Theresa Tam to think that.  The only thing we can do is control the Terrain so why does every government virus mitigation program do nothing but weaken the Terrain.  It is almost like they don’t want this to end. 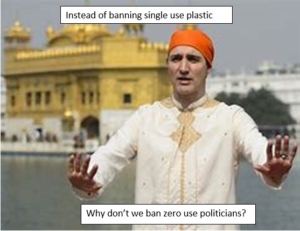 Subscribeto RSS Feed
When Will We Start Following the Science?It is Halloween, Go Ahead and Wear Your Mask
Scroll to top