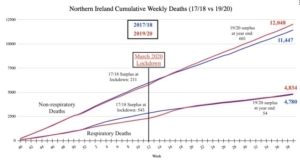 Governments want us to believe that we would have had even more covid deaths if it were not for the lockdown and it is true that by the end of the year Ireland saw 54 more respiratory deaths than they saw in the last bad flu season; a terrifying increase of 1.1%.  But, how do you prove a negative?  How do you prove that there would have been more respiratory deaths if we had not locked down?  Since deaths due to all causes increased during the lockdown it would be far more logical to conclude that the increase in respiratory deaths were due to the lockdown not the virus.  After all we deal with viruses every year; the lockdown is the only new variable.  There are a lot of things like hand sanitizer and masks that the government want you to use right now; logic is not one of them.

Since anything the government does not want us to do is likely the absolute right thing to do, let’s continue with logic for a little while longer.  Ireland like most insane governments imposed a harsh lock down and then gradually reduced restrictions.  As the restrictions were reduced respiratory deaths fell right back on to the 2017/18 trend.  Non respiratory did not go back to the trend.  For every week of the year from the lockdown to the end of the plot non respiratory deaths were higher than the 2017/18 trend even as restrictions were relaxed.  It turns out that panic, stress, unemployment, and lack of exercise have lasting long term effects.  Lockdowns truly are the gift that keeps on giving.

We have seen this deadly pattern in other countries.  In the US deaths from heart attacks, Diabetes, and Alzheimer’s are way up.  In Alberta our own Premier has acknowledged a link between the lockdown and increased Opioid deaths in the province.  My Brother sent me this video a few days ago.  I do not know who this guy is but he gives a very good summary of documented lockdown deaths throughout the world.

We are constantly told that Covid 19 is akin to the black plague.  The evidence we are given is the excess deaths but the longer this goes on the more apparent it is that the excess deaths were caused by government not a virus.  Why would governments do this?  The simple answer is “because they can”.  The more sinister answer is that this is not just depraved indifference it is a strategy.  The Moron in this next video has found it quite convenient to kill people.  Since he started his killing spree he has not had to show up for work, produce a budget, or explain why he stole tax money to give to his family.  He is also finding it much easier to do everything else that he wants.

I thought this was supposed to be a conspiracy theory. But here it is, straight from Trudeau’s mouth. The pandemic is the excuse for a “Great Reset” of the world, led by the UN. pic.twitter.com/ybugYfjhAq

The most dangerous thing in the world is not a virus.  There is nothing more dangerous than handing power to amoral people.  Especially ones that can’t acknowledge the depths of their own stupidity. 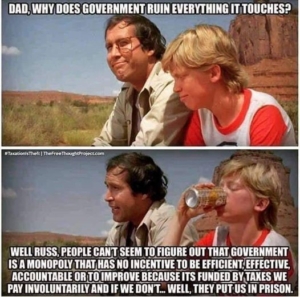