Canadian governments would love to hold you down and shove a needle in your arm.  The only reason that has not happened is that it violates Canadian law.  Violating Canadian Law is not something our governments normally worry about but the stakes this time are just too high.  They do not want to take the chance a court challenge could derail the great reset.

The backdoor to a vaccine mandate is making vaccinations a condition of employment.  For weeks governments have been urging private companies to mandate vaccines and many have already complied.  I don’t think these companies have thought this through.

Forcing vaccines on your employees violates all existing health and safety rules.  A CEO can be fined or imprisoned if he knowingly exposes his workers to toxic chemicals without giving them the proper training and PPE.  What kind of PPE works to prevent blood clots?  Who can train you to deal with an enlarged heart?

For some bizarre reason company executives are exposing themselves to potential lawsuits.  When it comes to worker safety companies normally are very risk adverse.  But when it comes to COVID vaccines the old rules do not apply.  Companies imposing vaccine mandates believe that the government has their back.  They will learn the hard way not to trust government.

Unfortunately it is only a matter of time before the Vaccines harm everyone that takes them.  If the immediate side effects don’t kill you ADE eventually will.  There are a lot of smart people warning about this but the warnings are falling on deaf ears.  Dr. Brooks makes some very dramatic predictions here.  Sorry I can’t find the original to embed you need to follow the link.

One of the last points Dr. Brooks leaves with is the impact the vaccines have on fertility.  Apparently miscarriages among vaccinated women have increased dramatically.  Companies may now be forcing infertility on their female employees.  The long term implications of this are staggering.

I guess we should not be surprised that the COVID vaccinations impact fertility.  After all one of the main vaccine proponents thinks we have too many people.  The clip below is a Ted talk by Bill gates on global warming.  Bill Gates is not a climate scientist.  He has no degree all.  His entire claim to fame is being wealthy.  A position he finds himself in after screwing over a business partner in a deal that was later ruled to violate US anti-trust laws.  I don’t know why anyone would listen to him about anything.

Despite his complete lack of qualifications, people paid to listen to Bill muse about saving the planet.  I found this part particularly interesting.

Bill thinks proper health care and vaccines can slow down population growth by 15%.  Don’t you find it interesting that a major investor in Moderna views vaccines as the road to lower fertility?  Moderna sells only 1 product.  A vaccine that does not work for COVID but does make women infertile.  That is just a coincidence right? 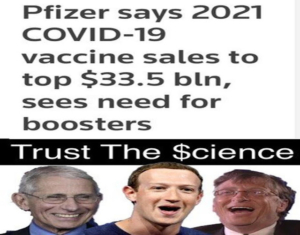