People die every day.  Life and death are a package deal one does not come without the other.  Almost 1000 people die every day in Canada during December and January.  All you have to do to take people’s rights away is to say that some of them died of Covid.  On January 4th I showed that the covid deaths in Canada are 40% lower than the normal respiratory deaths we see in the first week of January.  Covid is only alarming if those deaths are over and above the normal seasonal deaths.  Our government has been very careful to make sure we don’t have that data.

Governments never hide data that makes their policies appear sound.  They spend time and money manipulating data to try to support their policies however evil that policy might be.  When the data is so damning that it can’t even be misrepresented it is buried for as long as possible.  The only competence any Canadian government has ever demonstrated is the ability to tell half-truths.  That is why we know exactly how many people have died of Covid even though we don’t know how many people who have died.

There are a few countries willing to offer some transparency during this fake pandemic.  27 European countries have agreed to take part in a project called Euromomo.  These countries have committed to providing accurate weekly death statistics.  Think about that for a minute.  Most of these countries are more populous than Canada yet they can have accurate statistics weekly.  In Canada our death statistics are 8 weeks behind and even then are not accurate.  What do you suppose we are hiding?

The Euromomo data is available on line at euromomo.eu.  The way they present the data is not number of deaths but whether you are having more or less deaths than normal.  The zero line is normal that means for that week you had the average number of expected deaths.  The red line on each plot is one standard deviation above normal.  The two plots below are from Berlin and the province/state of Hesse in Germany.

You can see that there has been nothing out of the ordinary in either of these German districts in 2020.  Below are the official covid deaths. 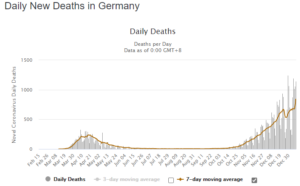 Almost 1000 people are dying of covid every day in Germany and there is nothing out of the ordinary.  Classifying deaths as Covid rather than influenzas does not make it an emergency. 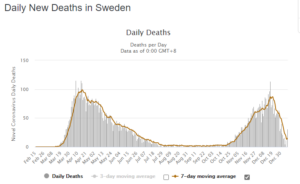 Sweden saw 2 peaks of covid deaths.  Here is the comparison to normal.

You can see the first peak circled in red but the second peak circled in green is not much out of the ordinary you can see the green oval in 2018 was just as large.  Sweden is the 11th oldest country on earth, 4.14% of their population is over 80.  Canada comes in at 22nd with 3.49%.  With its old population any new virus always hits Sweden hard.  Obviously a new virus went through Sweden in the spring but what is happening right now is simply normal.

Luxembourg officially has 840 covid deaths per million.  Twice as many as Canada (443/million) even though Luxembourg is a relatively young country (3% over 80).  Below are the Covid deaths. 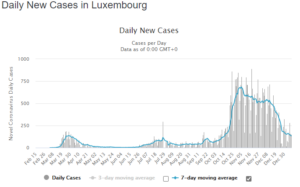 Luxembourg had a huge surge in covid deaths, curiously you don’t see that in the total deaths below.

Nothing out of the ordinary is going on in Luxembourg during this apocalyptic pandemic.  840 covid deaths per million makes Luxembourg one of the deadliest places on the planet yet they don’t have any excess deaths.

To be fair some countries saw very high peaks when the virus first hits as you can see below. 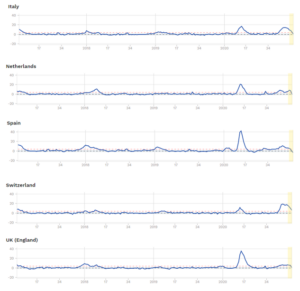 Any country that was hit hard in the spring is not seeing anything outside of normal now.  The virus has gone from epidemic to endemic.  Countries that got off lightly in the spring are still in the epidemic stage.  Many of the countries that saw very little last spring were praised for their “pandemic response” the reality is that the virus just did not get there before summer.

It does not matter what you do, the virus will find you.  After the initial first wave everything will go back to normal.  Despite what the dishonest media tells you most countries are already back to normal.  That does not mean people are not dying.  It is normal to see increased respiratory deaths in the winter.  Classifying everything as Covid does not mean we have a problem with a virus.  The only problem we have is with dishonest media and government.

The only exception to this is Italy who got hit hard in the spring and who have been hit hard again.  Italy is the 3rd oldest country in the world with 5.6% of their population over 80.  Italy also has one of the worst public health care systems in the world.  It is chronically underfunded and gets overwhelmed every winter.  Some of the most strict lockdown measures in the world were employed in Italy.  How many of the deaths in Italy are simply lockdown deaths?

Not a single thing that has happened should have been unexpected.  The pandemic is over.  It was over for most countries in April.  This is not about a virus.

Subscribeto RSS Feed
Covid 19, Greasing the Wheels For Rapid Political ChangeI am a New Convert. I agree it is Time to Defund the Police
Scroll to top