Yesterday I discussed the incredibly fraudulent study produced by Theresa Tam and therefore the Canadian government.  Tam claimed that the combinations of lockdowns and vaccines saved almost 800 thousand Canadians from certain COVID death.  Lockdowns did not change the shape of the infection curve anywhere including Canada.  Crediting them with saving nearly 400,000 lives is ridiculous.  The same can be said for the vaccines.  In the clinical trials more people died in the vaccine group than in the placebo group.  How can a vaccine that failed to save a single life in the clinical trials save nearly 400,000 Canadians?  Does the vaccine worked differently inside our Borders?

Theresa Tam and the Trudeau government are lying and it is a bold lie.  These ridiculous figures have no grounding in reality.  So why are they lying?  Justin Trudeau cannot tell the truth, his first and only reaction is to lie, but why react at all?  Why would you tell a lie this big?  Either Justin is laying the grounds for his criminal defense or he is getting ready to do everything again.

The first reason is plausible but unlikely.  With good reason Justin believes he is Teflon.  He has broken the law several times already with no consequences; why would it be any different this time?  The second explanation is more likely and it is the first thing my wife said when I told her about the fraudulent study.

It is true that anything theses sociopaths get away with they will do again.  I said that with the first lockdown.  I warned everyone that if we let them do this they will do it again.  No one listened and the government repeatedly shuttered businesses and instituted stay at home orders.  Stay at home orders are effectively voluntary house arrest.  Our government imprisoned the entire population with our consent.

Winter is approaching and the Trudeau government is signaling that lockdowns and vaccine mandates will return.  Victimization of ordinary people is now the norm.  We caused this because we allowed it.  This will not stop until the people responsible for it are punished.  Until then they have no reason to change their behavior.  Justin Trudeau’s criminality increases every time we turn and look away.

The same can be said of Anthony Fauci and the executives at Pfizer.  Fauci is still doing weapons research with corona viruses and Pfizer is busy weaponing the flu vaccine.  These people will not stop until we stop them, and make no mistake their success will spawn imitators.  Forgive and forget is not an option.  We need to send a message that we are done with this and that we will not tolerate it again.  The only way to end this is to put these sociopaths in prison.  If we don’t do that it will only get worse. 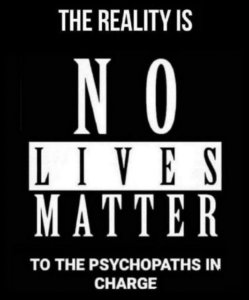 Subscribeto RSS Feed
The National Post and Theresa Tam are Lying through their TeethTheresa Tam is a Liar, Part 3
Scroll to top