Dr. Deborah Birx just published a book about COVID.  In her book she admitted to lying to President Trump so that he would go along with the lockdowns.  Now she has also admitted that she lied about the Vaccines.  She knew that they would not prevent infection or transmission but that is not what she told Trump or the public.  Dr. Birx is an unrepentant liar and unfortunately she is not the only public health official that label applies to.  The CDC is also lying about the vaccines; they just admitted it, although they did not flaunt their lies publicly the way Dr. Birx has.  The CDC buried their lies in the most recent job posting.

It seems the CDC is having trouble keeping up with all the VAERS reports.  They are hiring a contractor to do it for them.  Here is the estimated work load from the posting.

The contractor shall implement a staffing and operations plan focusing only on vaccine adverse event (VAE) reports after COVID-19 vaccines to help process an estimated 770,000 digital reports per year.

The official position of the CDC is that the vaccines are perfectly safe as long as you don’t count the 770,000 serious events expected every year.  Not only that but they think the workload could be higher than that.

Periods of heavier and lighter reporting volume are anticipated throughout the year. Contractor is responsible for maintaining active monitoring and adjusting of the number of reports processed on an annual basis.

The CDC is warning the contractor to be prepared to staff up.  Also notice the requirement for annual reporting.  The CDC expects these safe vaccines to produce 770,000 serious events every year for the foreseeable future.  The CDC knows damn well these vaccines are not safe.

The lies being told by public health officials have serious consequences.  People died from the lockdowns and people are dying from the vaccines.  If you don’t want to believe that the vaccines kill then explain to me how 3 Mississauga doctors died in the same week after taking their mandated 4th dose. Even people who survived the vaccines are dying from the vaccines.  This Vancouver woman died in the emergency room while waiting on care.  According to BC’s health minister the hospital is chronically understaffed because too many nurses are calling in sick.  At some point that moron needs to ask himself what is making all of his vaccinated and boosted nurses so sick.

This is murder.  The lies must stop and everyone responsible must be punished. 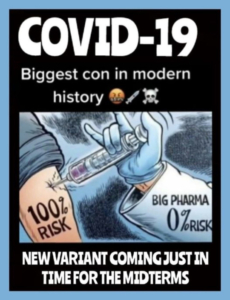 Subscribeto RSS Feed
In Tyrannical Times Rational Thought is OutlawedModerna, Pfizer, and Government are not your Friends
Scroll to top