Two days ago Tyrel added a comment to my December 17th post.  It was a short comment that only said “real science”.  Despite the brevity of the comment it was thought provoking.  Tyrel is correct our governments have unwittingly conducted a very well designed experiment.

The point of this experiment is to see if any of these conditions have an effect on how the virus works its way through the population.  Setting up the experiment is easier than judging success.  You could use case counts if you could control the demographics, population density, and testing protocols.  In this case that is not possible.  The only way you can judge the effects of the disturbances is to look for an inflection in the curve that does not exist in the control group.  As we saw, no such inflection exists for Alberta, British Columbia, or Saskatchewan.

So the experiment was a failure right?  No, there is no such thing as a failure in science.  You just proved that closing businesses, locking down, and forcing masks on people do not work.  You also proved it does not matter when these measures are applied they have no effect.  Eliminating things that have no effect is also part of science.  It is too bad our politicians are too stupid to interpret their own experiment.

On the surface this looks like good science even though our health bureaucrats failed to draw the right conclusions.  Unfortunately this was not good science for one crucial reason.  IT IS UNETHICAL TO EXPERIMENT ON HUMANS WITHOUT THEIR CONSENT.  Do you remember anyone asking you if you wanted to take part in this experiment?  Politicians look at polls that say more than 50% are in favor of lockdowns and take that as consent.  That is not consent.  Anyone who was not in favor of lockdowns should not have been forced to participate.

Forcing people to take part in experiments against their will was a hallmark of Nazis Germany.  The Nazis justified this by experimenting only on people they judged to be undesirable; Jews, Gypsies, and homosexuals.  Our governments chose to experiment on all of us against our will.  Once you understand that our governments view all of us as undesirable the Covid rules suddenly make perfect sense.  This is not about a virus. 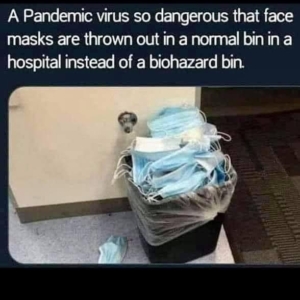 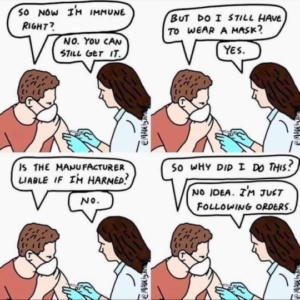 Subscribeto RSS Feed
PCRT Testing, Blurring The Line Between Covid and Influenzas This is What Happens When You Hire the Wrong People
Scroll to top