In Justin Trudeau’s Canada the irony is so thick you can cut it with a knife.  Canada is simultaneously spending billions to defend freedom in Ukraine and billions to destroy freedom in Canada.  Most Canadians have accepted their loos of freedom without complaint.  A few people have, however, stood up to Justin and have paid a high price for doing so.  One of those people is Tamara Lich.  Tamara was one of the organizers of the freedom convoy.  She spent several weeks in prison and is currently released on bail.

For her efforts the Justice Centre for Constitutional Freedoms has decided to honor Tamara with the George Jonas Freedom Award.  If Justin gets his way Tamara will receive this freedom award from the confines of her prison cell.  If by chance Justin has not taken her freedom by June 16th Tamara will receive the award at a ceremony in Toronto.  Even if Tamara remains free to accept this freedom award unvaccinated Canadians are not free to fly to Toronto to witness her receive a freedom award.

Like I said, so thick you can cut it with a knife. 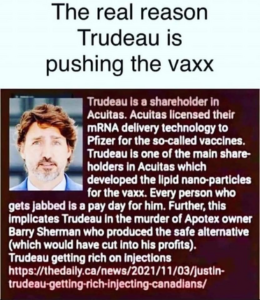