In my post of 2 days ago I linked a study that concluded COVID deaths were a result of government policy rather than the virus.  That may seem hard to believe but in reality it is very easy for the government to produce COVID fatalities.

The net effect of government restrictions was to isolate seniors from their families and ration their medical care.  There is no way that this would not produce large numbers of deaths that could be attributed to COVID, but the government wanted more bodies than could be produced through simple neglect.  The Government found ways to make the virus more deadly through enforced medical malpractice.

We know that COVID was circulating for months before the government shut down the economy.  During that time there were very few excess deaths.  Does that mean that people were not getting sick?  Of course not, people were obviously getting sick they just were not dying.

So what kept them alive?  I can’t be certain but I suspect that the answer to that is proper medical treatment.  When a doctor is confronted with a new illness he/she really has no choice but to simply treat the symptoms because there is no established protocol.  The symptoms of acute COVID are the same as a severe allergic reaction.  South African doctor Chetty noticed this early on and had nearly 100% success treating COVID with steroidal anti-inflammatories.  I suspect many COVID patients were treated similarly and sent home to recover.

All of that changed in February/March of 2020.  Suddenly this new illness had a name, COVID.  Along with the new name came a treatment protocol that specifically outlawed anything that might work.  It did not take long for bodies to start dropping.  The new standard was Remdesivir and ventilation both of which make COVID worse and accelerate the onset of Death.  The only way to avoid death was to escape the hospital.

Escaping the hospital is not just hyperbole.  Hospitals became COVID death camps under the government’s direction.  Just read this woman’s harrowing account of how the hospital continually made her illness worse until her husband rescued her.

COVID is not over because the economy is not yet completely destroyed.  The economy needs to be on its knees for the great reset to happen so you can count on more tyranny this winter.  Hospitals will once more be converted in to death camps and this year Canada has a new twist.  Trudeau is hiring COVID security guards to prevent any future escapes.  Next winter the only way you get to leave a Canadian Hospital is in a body bag. 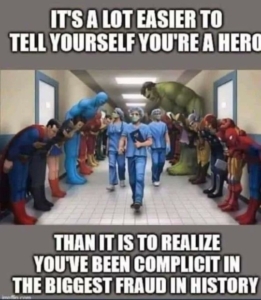 Subscribeto RSS Feed
Vaccine Risk/Reward does not work for any age groupWhy are the Alarm bells silent?
Scroll to top