Dr. Scott Atlas is a revolutionary.  He was put on Trumps COVID task force a few months before the election.  Dr. Atlas was the only MD on the on the committee who understood the Hippocratic Oath, “first do no harm”.  This gave him a very different perspective than Fauci and the media.  For them the goal seemed to be to do the most harm possible.

Dr. Atlas was strongly against lockdowns.  He recognized how harmful lockdowns were and that they were unlikely to help.  Being the voice of reason on a task force with the unstated goal of getting rid of Donald Trump did not go over well.  The media relentlessly attacked Scott Atlas even though they could not point to a single time he misquoted the science.

Scott Atlas resigned from the COVID task force after dominion voting systems gave the election to Joe Biden.  That was not good enough for the media.  They continued to attack Scott Atlas for the heinous crime of accurately explaining science in a way people might understand.  Recently Dr. Atlas described the relentless media campaign to discredit him in this speech.

He also spoke about the devastating long term effects of the lockdowns.  Here is a quote from the speech.

We know we have not yet seen the full extent of the damage from lockdowns, because it will last for years, even decades. Perhaps that is why lockdowns were not recommended in previous pandemic analyses, even for infections with far higher lethality.

Lockdowns are not a cure and are just as deadly as the disease.  To back up his argument about lockdown ineffectiveness he referenced this paper by his Stanford Colleagues.

After looking for health benefits to a lockdown they were forced to conclude the following.

While small benefits cannot be excluded, we do not find significant benefits on case growth of more restrictive NPIs. Similar reductions in case growth may be achievable with less-restrictive interventions.

The benefits, if they exist, were too small to be seen. Unfortunately the harm from the lockdowns is very evident.  It will take generations to fix the economic damage and we will never get back the lives lost to suicide and health care rationing.

I have been over this ground before but it is worth repeating.  Lockdowns do not work because;

Even the media is now forced to admit these businesses were not a problem.

Analysis Shows Restaurants, Gyms, Hair Salons Were Not A Significant Source Of COVID Transmissions, But There Are Caveats | The Daily Wire

Don’t believe them when they talk about caveats.  Masks and distancing did not work anywhere else but the “journalist” wants you to believe they might have miraculously worked in gyms and hair salons.  Or more laughably in restaurants where 90% of the time people are not wearing masks.  The media is finally ready to admit that the government may have had no reason to close these businesses.  They are just not ready to admit how they helped governments shatter lives.

The same media that Pilloried Scott Atlas are now admitting that he was right.  The media is eager to put distance between themselves and Governments that imposed lockdowns.  Do not let them get away with it.  They were eager participants in the conspiracy to destroy lives. 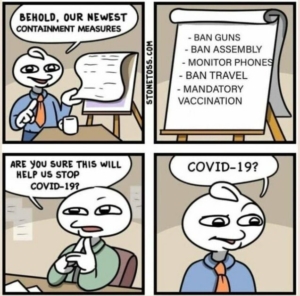 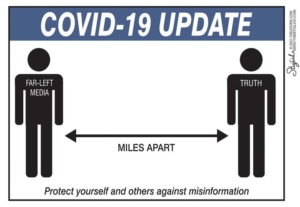